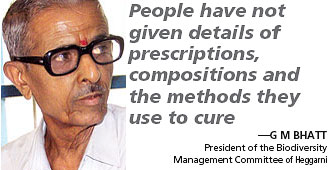 The biodiversity register of Heggarni panchayat in Karnataka is ready. Or, is it? The committee evaluating the register--part of the nationwide programme to document people's knowledge of biodiversity--is not sure whether villages have pooled in all their knowledge. There is room for doubt. People in Heggarni in Uttar Kannada district suspect that information about their biodiversity may be "misused". Though they welcome the idea of people's biodiversity registers, even conservationists fear local knowledge and practices could be commercially exploited.

Ironically, under the Biological Diversity Act, 2002, the National Biodiversity Authority (nba) promotes people's biodiversity registers to ensure protection against biopiracy and to provide legal cover for the intellectual property rights (iprs) and natural resources of local communities. "The idea is to build an open and transparent information system on biodiversity resources at the village level and upwards. Information from the registers will then be fed into a national database called the Indian Biodiversity Information System," says Madhav Gadgil, chairperson of an expert committee on Database on Biodiversity and Traditional Knowledge under nba.

Uttar Kannada district in the Western Ghats is known for its rich biodiversity and traditional knowledge. Preparing a proper biodiversity register should not have been a problem for the people in Heggarni. But when G M Bhatt, president of the Biodiversity Management Committee of Heggarni, approached villagers for the register, the response did not convince him. "People have not given details of prescriptions, compositions and the methods used to cure ailments the traditional way using plants with medicinal properties. The information we have might be incomplete. In some cases, people have just mentioned plants but haven't revealed how they use them for treatment," says Bhatt. Villagers say they would rather be careful. K K Naik of Birijaddi village in Heggarni fears if he and others reveal "their knowledge", it will be appropriated by multinational companies and they will lose control over the knowledge and resources. Garcinia gummigutta or Malabar tamarind, for instance, was overharvested recently when it was discovered that the herb contained a chemical that could cure obesity. Soon the herb was in short supply in the region.

Gadgil, however, says such exploitation can be addressed through a biodiversity register. "I believe the register is significant because it will empower people to get more meaningfully involved in conservation," he says.

Environmentalists disagree. Some believe availability of easily accessible databases could lead to exploitation, either by communities themselves or by industry. Conservationists say a national database could actually increase the chances of biopiracy. "Legal protection and effective community control should be facilitated. If they aren't, the database will lose its very purpose," says Kanchi Kohli of the Pune-based ngo Kalpavriksha, who is part of the Campaign for Community Control over Biodiversity. Its campaign statement reads: "Documentation must be able to establish community control over knowledge, and demystify and challenge the current ipr regime and counter any attempt to promote privatization and monopolization of knowledge and bioresources."

Though documentation of biodiversity and related knowledge can be a means of conservation, the capacity of communities to handle such documentation needs to be built first, Kohli adds.

For Gadgil, such concerns may be "overestimated" because information about the commercial value of biodiversity is available easily. He says a comprehensive plan, including legal rights, to ensure that people benefit from the register, is being made to avoid biopiracy. Gadgil adds that iprs are less important in the context of conservation and sustainable use, although it may be necessary to restrict access to information on issues like exact areas of occurrence of certain species.