KCR sworn in as first chief minister of Telangana

Reconstruction will be state's top priority, but to implement his agenda Chandrasekhar Rao will need to develop a cordial relationship with the Modi government at the Centre 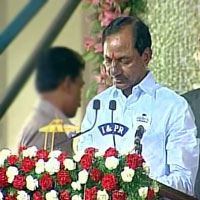 After a six-decade-long struggle for separate statehood, Telangana became a reality on Monday with the President's rule ending at midnight. The new state carved out under the Andhra Pradesh State Reorganisation Act has 10 districts.

K Chandrasekhar Rao, president of Telangana Rashtra Samiti, who spearheaded the movement for a  separate state for 13 years, was sworn in as the first chief minister of the youngest state along with eleven ministers at a function held in Raj Bhavan in Hyderabad at 8.15 am Monday. The council of ministers may be expanded in the coming days. Right now, there is not even a single woman in Rao's team of ministers.

ESL Narasimhan, who was the governor of undivided Andhra Pradesh, has taken charge as the Telangana governor.

Welfare of marginalised to get top priority

By Sunday evening, Hyderabad turned into a “pink city” with with TRS party workers flowing into the capital from other districts holding pink flags and pink banners bearing “Jai Telangana” slogans. Huge crowds gathered at all centres in different parts of the city. The atmosphere was of one of euphoria. Hope and excitement permeated everywhere in the new state. Singing and dancing continued till midnight. The birth of the new state was marked with brilliant and colourful fire works.

"After years of struggle, finally we achieved Telanagana, the long cherished dream of the people. It's a new beginning. Like the Telangana movement there should be another movement for reconstruction and the development of the new state," said Rao as soon as President's rule ended. "My top priority is effective implementation of welfare schemes followed by irrigation and agriculture, power and industrialisation. Development of disadvantaged communities such as Scheduled Castes (SCs) and Scheduled Tribes (STs) will always remain at the top on my agenda," he said.

TRS's manifesto released prior to the election states that if voted to power habitations of tribals would be recognised as gram panchayats and it would spend Rs 50,000 crore in the next five years on SC communities, Rs 25,000 crore on backward classes and Rs 1,000 crore in five years on the welfare of Muslims. TRS has also promised that 1.2 hectares (ha) of land would be given to SC families that depend on agriculture for their survival, Rs 1,500 pension for the disabled and Rs 1,000 pension for widows and aged. The party has also promised salaries and pension to the state employees on par with the Central government.

Prime Minister Narendra Modi has congratulated the new chief minister. To implement his welfare agenda and getting enough funds, Rao will have to develop a cordial relationship with the Modi government at the Centre. On May 28, he antagonised the Central government by strongly criticising the Polavaram ordinance promulgated by the Centre.

The controversial Andhra Pradesh State Reorganisation Bill was rejected by the state Assembly on January 30 this year. However, the Bill was passed in Lok Sabha on February 18 by voice vote in the face of noisy protests by Seemnadhra MPs. It was subsequently passed by Rajya Sabha on February 20. Subsequently, President Pranab Muhkarjee gave his consent to the Bill on March 1. Andhra Pradesh was under President's rule since then.

The Finance Department completed the formalities of transferring the cash balance into the consolidated accounts of the two states by May 31. The existing cash balance of Rs 6,000 crore has been divided between Telangana and Andhra Pradesh in the population ratio 42:58. As many 9,893 state cadre employees have allocated to Telangana state provisionally.

In Andhra Pradesh, the residual state with 13 districts, N Chandrababu Naidu, leader of the Telugu Desam Party, an ally of BJP, will be sworn in as the new chief minister on June 8. The Central government has declared a special package of Rs 50,000 crore to develop the residual Andhra Pradesh since most of the investments were concentrated in Hyderabad city. Hyderabad will remain a common capital for Telangana and Seemandhra for 10 years. Within this period, Andhra Pradesh will have to develop its own capital.

K Chandrasekhar Rao will hold his first cabinet meeting Monday afternoon and will announce the major decision of the government.