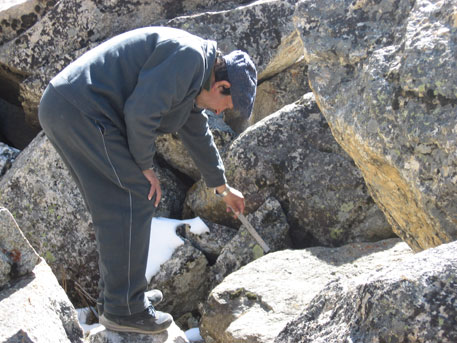 The Kedarnath temple is one of the few structures in the Garhwal region of Uttarakhand to have escaped relatively unscathed in the recent floods. The temple is located in the Kedar valley below the Chorabari glacier, which is the source of the river Mandakini. While little is known about the glacier’s history, a study of lichens has revealed clues to the glacier’s past and the temple’s present.

The glacier on each side has a snout from where water trickles down to form the river Mandakini. The river receives most of its water from the right snout which is at 3,865 m above sea level. The left snout at 3,835 m also feeds the Mandakini, whose main channel flows about 100 m northwest of the Kedarnath temple. Studies indicate that until a few years ago, the basin area of the glacier was about 38 sq km, with the glacier occupying 15 sq km. The glacier has advanced and retreated several times over centuries of climatic variation and its dimension may have been altered. Knowing when these events happened could help understand long-term climate change in the region. Lichens have provided a clue to the geological history of the region and have helped demonstrate the resilience of the Kedarnath temple. 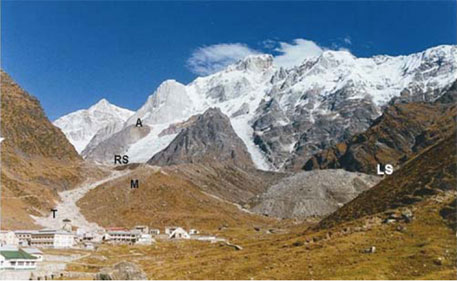 Clue to the glacier’s history

Lichens are a composite organism developed through a symbiotic relationship between fungi and algae. Ravinder Kumar Chaujar, retired professor from Wadia Institute of Himalayan Geology, Dehradun, studied lichens growing on the rocks of Chorabari’s moraines to determine the glacier’s history.

Chaujar identified four well-defined moraine loops present at altitudes of 3,160, 3,320, 3,440 and 3,640 m. Moraine loops are formed of rocks and soil. As the glacier recedes, the ice melts, leaving the moraine behind. Moraine loops thus indicate the path taken by the glacier over time.

Chaujar found that the yellow-green lichen, Rhizocarpon geographicum, on the rocks grew at the rate of 1 mm per year. Using the size of the lichen and some statistical refinements, Chaujar suggests that “climatic changes in the area started nearly 258 years ago”.

What came first: glacier or temple?

Chaujar’s findings are intriguing, considering the fact that the Kedarnath temple, located in the middle of Chorabari’s moraine loops, was supposedly built by the Pandavas. Religious literature and archaeological studies too suggest the minimum age of the temple is about 3,000 years. The inscriptions on the wall of the temple date back to 650-850 AD. They describe the beauty of the temple, but there is no mention of snow, ice or glaciers. Chaujar says this raises three possibilities: (a) The temple was built when there was no glacier in the area;

Chaujar believes the temple was built before the glacier existed in the area. In his paper published in 2009 in Current Science, Chaujar says the glacier could have developed during the Little Ice Age (1300–1900 AD). The glaciations around the temple would have started during the mid-14th century and continued till around 1748 AD. After this, there was a period of recession and then advance of the glacier.

Chaujar’s findings suggest that the Kedarnath temple remained submerged in ice or in the glacier for at least 400 years. It survived due to its sturdy construction. Striations on the wall of the temple, that could have formed when the glacier moved around the structure, further support the theory.

It is believed that large amounts of water flowed down from the Chorabari lake formed by the melt of the glacier.  This was worsened by excessive rains in Uttarakhand. Chaujar says that most of the water came down from the left channel. This put the Kedarnath settlement at risk as the river was at a higher level compared to the settlement. While photographs show the hotels and residences around the temple are destroyed and the area buried in rubble, the temple itself seems to not have incurred much damage.

The fact that the Kedarnath temple survived the period of submergence in ice for 400 years suggests that the temple would survive episodes like the present flooding, says Chaujar.