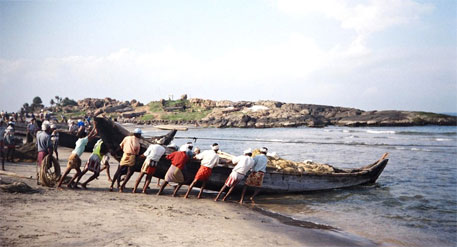 The Kerala State Biodiversity Board has entered into the second phase of its unique programme of mapping marine biodiversity of the state. The objective of the mapping is to produce a data bank on its marine flora and fauna, fish habitats, ecosystem, traditional fishing techniques and indigenous knowledge of the fisher communities.

The state has a 580 km-long coastline, stretching from

Thiruvananthapuram in the south to Kasaragod in the north along the Arabian Sea, on the western coast of the country.

"Mapping marine biodiversity and preparing a data bank is  the first of its kind in the country," says Oommen V Oommen, the board's chairperson. It is part of the board's biodiversity registry

programme. The mapping is done by Protsahan, a Thiruvananthapuram-based non-profit, with the help of fisher communities.

The first phase of the initiative was started in 2012. A 20 km coastal stretch between Valiyathura and Puthukurichy in Thiruvananthapuram district has been mapped in the first phase. The mapping covered an area of 13 nautical miles into the sea. "We still don't know much about the marine ecosystems and traditional knowledge of fishers. Recording these is very important for conserving biodiversity," points out Oommen who has accompanied fishers into the sea seven times as part of the mapping programme.

In the first phase, around 50 ecologically sensitive natural coral reefs and habitat of various rare marine species had been identified.

The second phase of the initiative—a 50 km stretch between

Thiruvananthapuram and Kollam—began on Monday. "We're hopeful to cover the entire coastline of the state in due course," says Oommen.