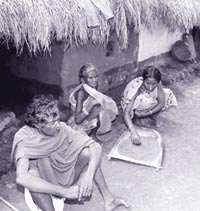 hunger deaths in the Kashipur district of Orissa last year had captured national and international attention. A recent report of the National Human Rights Commission (nhrc), however, reveals that the real cause of the death was food poisoning resulting from consumption of toxic mango kernels with fungal growth.

"A medical team which visited the affected villages and examined the post-mortem reports has confirmed that the cause of the deaths was food poisoning," says Chaman Lal, special rapporteur of nhrc. According to Lal, the poor resistance level of the local people, combined with an inefficient public healthcare system, is the main cause of the high mortality rate in the area.

The nhrc report has reconfirmed the official version. But the administration, instead of providing relief to the starving population, has turned a blind eye to their woes. "The issue of poverty of the majority of people in Kashipur, who are landless and without any sustainable means of employment, has not been looked into by the state government while conducting the probe," points out Lal. He adds that people living below the poverty line in the region are forced to eat poor substitutes for food like mango kernels.

The nhrc report has underlined the need for allotment of plots to the landless, development of irrigation through watershed projects and identification of moneylenders and their elimination as some of the measures to tackle the problem in the region.

Experts such as well-known environmentalist Arttabandhu Mishra of Sambalpur University, however, point out that the development of forest resources in the region and rights of people -- not of the mining industries -- is the right remedy.