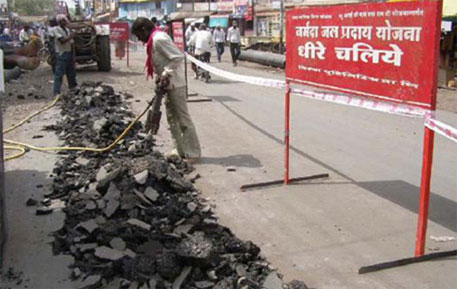 Despite specific court order to the effect that the municipality must continue to supply water to the residents of Khandwa town in Madhya Pradesh, the Khandwa Municipal Corporation (KMC) has stopped its local water supply from Sukhta reservoir. The town is receiving water from the Narmada Jal Yojana, a public private partnership (PPP) project of Vishwaa Infrastructure and Services Private Limited. Water from the Indira Sagar dam on the Narmada river is being supplied since almost a week in violation of court orders, informs Tarun Mandloi, coordinator of Khandwa Jal Sangharsh Samiti, a citizens’ body opposing privatisation of water in the town.

Municipal Commissioner Shobharam Solanki has blamed the state Water Resources Department for stopping water supply to the town, but citizens contend that despite water being released from the Sukhta reservoir, KMC is continuing to supply Narmada water, which is likely to cost citizens Rs 400 to Rs 600 per household per month.

In December 2012, when the notification for the Rs 106.72 crore project was published, more than 60 per cent of water supply connection holders wrote to the municipal council, opposing the move. As many as 10,334 objections were filed. Citizens said the scheme, which involves lifting water against gravity from a distance of 52 km, is unviable, and the terms of the memorandum of understanding (MOU) between government and Vishwaa will make citizens totally dependent on the private player for water supply.

Following stiff opposition, the government formed an independent committee, headed by Tarun Kumar Pithode, chief executive officer of Khandwa Jilla Parishad, and comprising government and non-government experts, to look into the objections. In June 2013, the committee rejected the project on several counts of serious malpractices  However, the state government took no decision on the issue, and the construction work on the scheme, floated under the Central government’s Urban Infrastructure Development Scheme for Small and Medium Towns (UIDSSMT), continued.

However, on October 20, 2014, just before the municipal elections in the state, government reissued the notification for the project, leading to another round of protests from citizens. Following this, government hastily announced that it was cancelling the notification.

Recently, during the municipal elections in the state in November 2014, the issue of water supply became an election issue, as political parties made the cancellation of the privatisation bid part of their local manifestoes. Chief minister Shivraj Singh Chouhan, during his election campaign, promised to scrap the project.

However, after the election, in violation of its own election promise, the new municipal council announced the shutting down of the water supply from the Sukhta reservoir and its own borewells. Following this, the Jal Sangharsh Samiti, jointly with the Aam Aadmi Party, filed a public interest petition in the Jabalpur bench of the state high court. On December 20, the high court stayed the move and instructed the municipality to not tamper or hinder local water supply in any manner.

Despite this order, water supply from the Sukhta reservoir was shut down about a week back, says Mandloi. “Water from the reservoir had not been released to the Jaswadi barrage, where the water is lifted for the city,” he said.

Solanki, the municipal commissioner, told Down To Earth that water supply was cut off by the Water Resources Department after KMC failed to pay dues worth Rs 1.54 crore. “I have written to them to release water with reference to the court order,” said he, “but the water resources department has failed to release water. The water from the Narmada project was started only as an emergency measure.”

Citizens have, however, hotly contest this. “Water was, in fact, released from the reservoir, and reached the barrage at noon on January 1,” said Mandloi. “However, water supply has still not been reinstated, and the municipality is not giving any reason for it.”

Solanki, meanwhile, said that in his election promise, the chief minister had asked the corporation to take the decision to scrap the scheme, but the newly elected corporate body has not yet been sworn in. “The matter will be presented before the body at its first meeting on January 14 after which the final decision regarding the scheme will be taken,” he said.