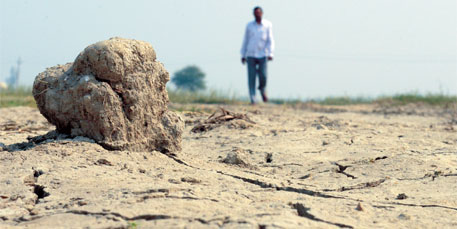 CASTE-BASED khap panchayats of Haryana are usually in the news for passing regressive and, often, controversial orders in the name of honouring social customs. But this year in January, the Jhakkar khap panchayat of Jhajjar district gave a rather unusual order in the larger interest of the farming community. It ordered that all the 36 villages under it should stop growing paddy.

The reason: paddy cultivation in the region has led to severe waterlogging and soil salinity. The problem started in the 1970s when the groundwater level rose with the arrival of the Jawaharlal Nehru canal and people saw an opportunity to grow water-intensive paddy. But the rise in the level of groundwater, which is saline, led to soil salinity and rice cultivation aggravated the problem. Jhajjar is not the only district affected; an estimated 50,000 hectares (ha) of farmland in the state is in critical condition, according to official data (see ‘Threat to soil fertility’). 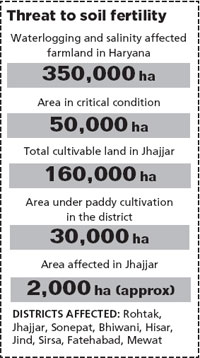 Ramphal Jhakkar, resident of Dhanirwas village in Salhawas block, says though he did not grow paddy, its cultivation by his neighbours destroyed jowar (sorghum) and arhar (pigeon pea) on his 3.8 ha farm last year. “If we grow other crops, we will benefit. But if we grow paddy, we lose,” he says.

This kharif season, the farmers in the villages under Jhakkar khap, with a total farmholding of 32,375 ha, hope to improve their harvest. They say that waterlogging has reduced significantly in the absence of paddy. In the 36 villages, only four households in one village, Akeri, grew paddy this season, says Maher Singh Jhakkar, general secretary of the khap panchayat. “A month ago, the panchayat met to discuss punitive action to be taken against the ‘errant’ farmers. At the time of imposing the ban on paddy cultivation, a penalty of Rs 5,100 had been agreed on,” says Singh. Finally, it was decided that people should not be forced, but persuaded to abandon paddy, he adds.

Now other khap panchayats are also considering a similar ban on paddy. The Sangwan khap panchayat, which has 40 villages under it, is one of them, says Singh. Some people say the decision is a reflection of the dominant sentiments of the farming community. “Credit should not be given to the khap panchayat alone; problems of saline water and waterlogging are old and slowly people are realising the damage paddy is causing and they are opting for alternatives,” says Inderjit Singh, an agriculture expert and CPI(M) state secretary who works with the farmers in the region. 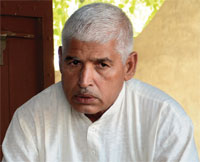 But in most areas in the district, paddy is still seen as a profitable crop. Naveen Kumar of Bamdola village in Jhajjar block says paddy is the only option for farmers. “While the state irrigation department has been telling farmers not to grow paddy, the state is providing subsidy for seeds and fertilisers for paddy.

Additional director of Haryana’s agriculture department, B S Duggal, endorses this. “While farmers are aware of the problem of salinity due to excess paddy cultivation, they are forced to grow rice because there is no viable alternative,” he says.

Jhajjar’s agriculture officer Madan Mohan insists the problem is limited to just three district blocks: Matenhal, Jhajjar and Beri. “Soil salinity is prevalent only in areas where the recharge of groundwater is higher than the rate of discharge,” he adds. He says zero tillage—sowing seeds after rains without ploughing—and subsurface drainage (SSD) of saline water are the main techniques in use for solving the problem.

Haryana and the Union government have spent large amounts reclaiming damaged farms, but to little avail. There are three main ongoing programmes to tackle the problem (see ‘Projects to reclaim ...’). Between 2004 and 2007, the irrigation department of Haryana sponsored a ditch and seepage drains scheme worth Rs 18.93 crore; this has been merged with other ongoing projects.

In 2008, the state initiated a scheme to reclaim 1,000 ha through bio-drainage—clone variety of eucalyptus trees were to be planted around fields to suck excess water—and the Centre was to defray half the cost amounting to Rs 1.5 crore. This project seems to have been abandoned. The National Bank for Agriculture and Rural Development (NABARD) is also extending financial assistance by way of refundable loans for new drainage schemes.

Seven drains have been built at a cost of Rs 203 crore, of which NABARD spent Rs 158 crore. But the progress of land reclamation work is slow because SSD works can be carried out only from April to June and again in October-November when the fields are fallow. Availability of fresh water (for cleansing soil) and surface drains are essential for installing such systems.

The Rashtriya Krishi Vikas Yojana also has a programme for spreading awareness about tackling waterlogging, soil salinity and to create adarsh grams (model villages). But the villages under the Jhakkar khap seem to be the only ones which have decided to abandon paddy cultivation altogether.

At present, the irrigation department has to deal with two problems arising from paddy cultivation—water theft and pumping stagnant water from fields. The department files 150 to 200 police complaints against farmers in Jhajjar for stealing water every week. A policy decision banning paddy cultivation is needed to solve the problem. Or one waits for other khap panchayats to ban paddy.