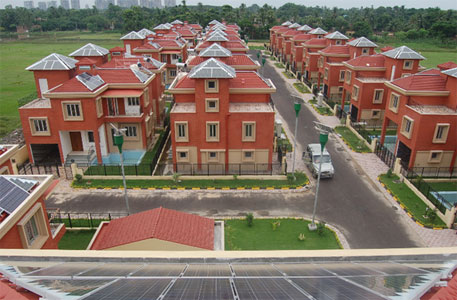 The Calcutta High Court in a judgement on June 11, ordered civic authorities to ensure all highrises in the city of Kolkata have rooftop solar panels installed within the next four months. The judgement came in response to a public interest petition filed by environment activist Subhas Dutta in 2009.

‘West Bengal meets 97 per cent of its power requirement from coal, much higher than the 64 per cent for India. To meet our emission targets by 2020, we need to reduce our dependence on thermal power and bank on renewable sources,’ says Dutta. ‘The building rules of the Kolkata Municipal Corporation (KMC) specify that any highrise over 15.5 metre (five storeys) in height needs to install rooftop solar panels. For other municipalities in West Bengal the cut-off is 14.5 metre (four storeys). The High Court order will finally move things in the right direction,’ he adds.

Ten per cent from renewable sources

The bench consisting of Chief Justice Arun Mishra and Justice Joymalya Bagchi also instructed power utilities in West Bengal to meet their renewable energy obligations to purchase or generate 10 percent of power supplied through renewable sources. This has to be ensured by the West Bengal Electricity Regulatory Commission. At present, power utilities in the state source less than 0.5 percent of their energy supply through renewables, says Dutta. The court has asked the state to look into how to reduce direct or indirect taxes on solar panels.

‘The challenge is to get the power utilities and builders interested. To store the power generated via rooftop panels in batteries might be impractical; it is necessary to connect the solar power generation system to the grid. Therefore we need to change the power metering devices,’ says Himadri Guha, former professor of civil engineering at Jadavpur University and now a developer himself. Kolkata has only once such equipped housing complex, Rabi Rashmi in New Town, says Guha.

Rabi Rashmi is India’s first solar housing complex developed in 2008 where each home generates 2 kilowatts (KW) of electricity with rooftop panels, uses it for domestic purposes and also feeds it to the grid. The home owner pays the power utility provider on the basis of net metering. Each of the 25 bungalows has a solar water heating system while the community centre has a solar power generation capacity of 8 KW. Area lighting and signages are lit by solar power. The project was conceived by West Bengal Renewable Energy Development Agency (WBREDA) and managed and engineered by Development Consultants Limited.

‘After the High Court judgement we can ask the KMC building department to ensure buildings get NOCs only after they agree to install solar panels,’ says S P Gon Chaudhuri, former director of WBREDA and now an advisor to the KMC. ‘High rise complexes can generate between 50 to 100 KW of power which can be used to power common facilities. The costs can be recovered in 4-5 years,’ he adds.