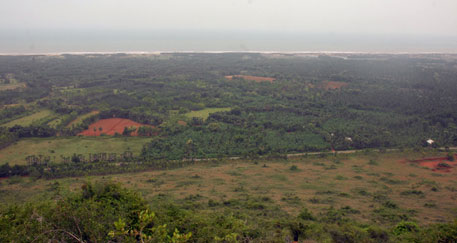 The Andhra Pradesh government has issued an order, notifying villages that are likely to be affected fully or partially by the proposed nuclear power plant at Kovvada in Ranasthalam block of the coastal district of Srikakulam. The order issued on November 1 by Mrutunjay Sahoo, principal secretary, states that 1,916.27 acres (1 acre equals 0.4 hectare) of land, including 604.12 acres of private land, will have to be acquired for the 6,000 MW project. As per the government’s estimation, 1,983 families (7,960 persons) in five villages will be displaced by the nuclear plant.

The government issued the notification as per the state’s policy—Resettlement and Rehabilitation (R&R) for Project Affected Families, 2005. Villages which figure in the notification of “Project Affected Zone” are Ramachandrapuram, Gudem, Kotapalem, Tekkali and Jeeru Kovvada. The main source of income of people who would be displaced are agriculture, fishing and wage labour, notes the order.

The Department of Atomic Energy of the Central government had given in-principle approval for the 6X 1,000 MW nuclear power plant comprising light water reactors in 2009. The ambitious Rs 60,000 crore plant is being set up by the Nuclear Power Corporation of India Limited (NPCIL).

The government order says the district collector of Srikakulam, in a letter dated June 20, 2012, has stated that the chief engineer of the NPCIL has submitted a proposal for acquiring 2,436.77 acres of land in these villages for installing the reactors, establishing a township and rehabilitating the displaced families. The state government had sanctioned a Land Acquisition Unit in last December for starting the land acquisition process by identifying the land. The acquisition of land and houses will be under the Land Acquisition Act of 1894, says the order.