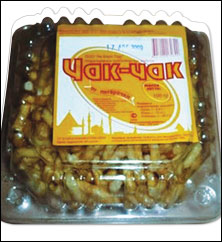 Abakery in the Russian autonomous republic of Tatarstan has signed a unique agreement with the region’s government. It can now use the picture of the republic’s seat of government, Kazan Kremlin, on its products.

The large bakery, which produces the Tatar sweet chak-chak, had been using the image since the past two years. On May 7, the republic’s office of antimonopoly service charged it with violation of intellectual property rules. The Kremlin museum in Moscow has copyright over the images of the seats of government in Russia.

But 10 days later, the bakery entered into a licence agreement to use the trademarked images of the Kremlin. Bakery representative Gaziz Khalikov said the contract is for one year, during which the company will pay licence fees based on how often it uses the image.

The Kremlin museum and the bakery refused to say how much it will cost.