The fourth rejection in a row for proposed bauxite mining was expected; that a diminutive tribal wanted to remain ‘illiterate’ forever wasn’t 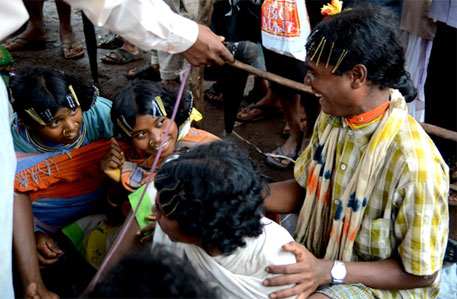 Kunakadu, a tribal hamlet in Kalahandi district of Odisha echoed the decision of the previous three palli sabhas on Wednesday. The scenic hill top village unanimously rejected proposed bauxite mining in the Niyamgiri hill range. Early on, the mood was set by an animated Tunguru Majhi who spoke for 20 minutes, directing his words at district judge Pramod Kumar Jena, appointed observer to the village council proceedings by the Supreme Court of India. Jena listened to Majhi with rapt attention, taking notes in between.

“’Jharna, pani, paban, patra... sob loss hai jibo’ (streams, water, air, leaves... everything will be lost)... Niyamgiri is our medical centre... our ‘jani, bejuni’ (village priest and priestess) collect medicinal plants to treat our children. Do understand before you leave that the government has no right over these hills,” said a diminutive Majhi. “Like the Brahman and the Kayastha worship lord Jagannath, we worship our Niyamraja. We will die like Birsa Munda and Rindo Majhi (both Munda and Majhi led  tribal uprising against the British)  if you don’t give up now. We are a ‘murkhya jati’ (illiterate lot) who will never listen to you.”

Kunakadu is one of the 12 villages—seven from Rayagada and five from Kalahandi district—selected by the Odisha government to decide on proposed bauxite mining and whether this will infringe on the religious and cultural rights of the tribal forest dwellers. The public referendum follows the Supreme Court decision on April 18, directing palli sabhas or village councils to take a final call.  A joint venture of the Orissa Mining Corporation Limited (OMCL) and Sterlite Industries, the Indian arm of the London Stock Exchange-listed Vedanta, wants to mine the Niyamgiris for bauxite, to feed Vedanta’s alumina refinery on the foothills of Niyamgiri hills at Lanjigarh. 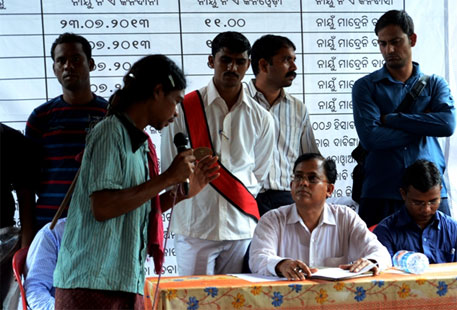 The palli sabha in the Dongria Kondh tribal hamlet was rather lacklustre after Majhi’s spirited speech. The mood was like one seen in a match already won. All of the 23 voters spoke, mostly in their tribal language, Kui. The difference was lost on the panchayat official who translated Kui to Odiya for the audience. After two days of translating the endless nos greeting Vedanta proposal, he parroted a standard text: “we worship the entire Niyamgiris. We get ‘phala, mula, kanda’ (fruits, roots, tubers). We will give Niyamgiri over our dead bodies.” He invoked death in abundance, even when it wasn’t mentioned by the speaker!

The palli sabha also rejected two community claims to the forest that residents said were not submitted by them. “You can file individual and community claims under Forest Rights Act, 2006, at a later date,” the assistant district welfare officer, Uttam Kumar Mohanty, informed the village council. 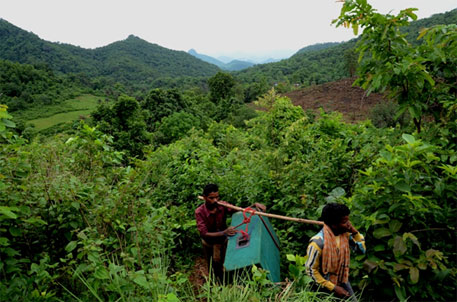 Kunakadu tested the limits of those paying a visit. All except the tribals were panting after the steep climb, slippery after the previous night’s rain. I was elated to see “Jatrakudi penu”—a wooden structure representing a local deity at the entrance to every Dongria Kondh hamlet to ward off the evil—for it meant the end of an arduous trek. After the meeting was over, all and sundry were invited for a steaming lunch of rice and vegetables served on “siali” leaf plates. Forest dwellers arranged for a simple meal, every household contributing their share in kind.