After a gap of about five years 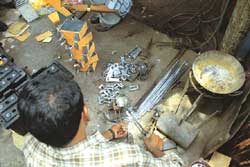 The notorious ocean current El Nio has a shy counterpart, La Nia, which has made an appearance after a gap of about five years. La Nia is a part of a continual but irregular cycle of cooling waters in the equatorial Pacific and will affect global weather patterns for the next several months, according to the US meteorological agency -- the National Oceanic and Atmospheric Administration (NOAA). It may help India overcome the drought caused by El Nio over the last few years.

The agency has reported the cooling of sea surface temperatures of the equatorial Pacific (on an average 0.5C) since January, confirming La Nia's return. The current can cause Pacific temperatures to drop by as much as 13C along the equator. The current causes parts of the world to experience rain or drought more intensely until May or June, or possibly longer, said Edward O'Lenic of NOAA. In contrast, El Nio warms the equatorial Pacific waters.

La Nia usually causes increased rainfall across South and South East Asia, northeastern Australia, the Amazon Basin, southeastern Africa, the US Great Lakes region and Pacific Northwest. In contrast, below average rainfall normally occurs across the eastern half of the Pacific at the equator. La Nia also tends to intensify hurricane activity in the Atlantic ocean.