Scientists have genetically engineered specific antibodies to prevent organ rejection in transplants and to combat cancer. This opens up new possibilities in medical immunology. 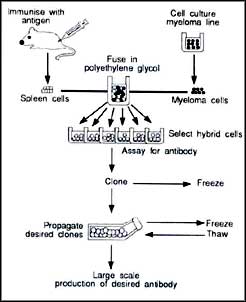 A REVOLUTION is taking place in medical immunology with the discovery of a method to produce monoclonal antibodies, which offer a powerful and less toxic treatment for diverse diseases, from cancer to rheumatoid arthritis, than most available drugs (British Medical Journal, Vol 340, Nos 6864-6).

In the mid-1970s, a group of scientists at Cambridge developed a technique to generate, in the laboratory, large quantities of specific antibodies, known as monoclonal antibodies, which are antidotes produced by the body against specific antigens -- usually foreign proteins, such as those of bacteria, which could be dangerous to the body. These antibodies combine with the invading organism to neutralise it.
Antibodies are produced by special cells called B cells that found in the human spleen. The body often produces a number of antibodies when confronted with a foreign organism. The intruder consists of several proteins and each antibody is produced in response to a specific protein. The entire group of antibodies is known as polyclonal antibodies. A monoclonal antibody is any one of these antibodies, produced by a specific B cell in response to a particular antigen.

Techniques to produce antibodies have been developed only recently. But strides in the field are being made so rapidly that it can already be used for tests in therapeutic models. By the time pharmaceutical companies are able to scale up their production, the production method and the specific antibody is already superseded. Nonetheless, several companies have taken the plunge and some estimates indicate the total world market for monoclonal antibodies will reach $ 1,000 million by 1994, and rise to $ 6 billion by 2000.

In 1975, George Kohler and Cesar Milstein of the Medical Research Council Laboratory of Molecular Biology in Cambridge developed a technique to produce pure monoclonal antibodies (See diagram). Since then, scientists have developed a number of diagnostic tests using monoclonal antibodies that are now in the market. However, they have discovered that mouse antibodies are inappropriate to treat human beings because they themselves behave like antigens and become the target of the human body's immune response. These problems do not arise with human monoclonal antibodies, but they are difficult to manufacture.

To make antibodies acceptable to the recipient, "humanised" antibodies are made, using new antibody engineering techniques. Scientists have also found that monoclonal antibodies can be chemically joined to a variety of substances, including plant and bacterial toxins, enzymes and cytotoxic drugs. In this way, an ineffective rodent antibody fragment is joined with an effective part. Antibody fragments can also be coupled with radioactive elements and used for cancer therapy.
By altering the DNA of bacteria-destroying viruses, known as bacteriophages, scientists have created what are called phage antibody libraries. Using these, they are able to make sufficient quantities of even human monoclonal antibodies. Starting from the bone marrow of an HIV-infected person, large numbers of human antibodies against HIV have been generated using these techniques. Scientists have also developed techniques to clone and reconstruct the gene coding for specific antibodies.

The first monoclonal antibody approved for use in human beings is an immunosuppressive agent for countering rejection of kidney transplants. The host body sometimes rejects a donor organ because it recognises the organ as an antigen and produces its own antidotes to it. Monoclonal antibodies can suppress this immune reaction and ensure the kidney is not rejected. Normally, corticosteroids, cyclosporin and cytotoxic drugs are prescribed to prevent rejection, but they are often ineffective and usually toxic.

Monoclonal antibodies have recently been used to treat septic shock. Antibodies are also being developed to target common pathogens such as the herpes simplex virus.

By far, the most exciting of possible applications is the use of monoclonal antibodies to treat cancer, but as yet their use has been limited by the inability of the antibodies to reach the target cells, because of their large size. Treatment of malignant blood cancers, especially in the bone marrow and spleen, have been more successful than solid tumours. CAMPATH-1H, produced in Cambridge was the first humanised antibody to enter clinical trials and it has been effective in patients with lymphoma -- cancer of the lymph glands.