Women quarry-workers in Tamil Nadu's Pudukkottai district have formed cooperatives and are managing the same granite quarries where they once worked as bonded labour. 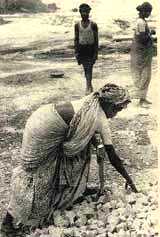 THAT LITERACY is liberation may be rhetoric in many parts of the country, but not in Tamil Nadu's Pudukkottai district. Total literacy was reported in this granite quarry region in August 1992, and it brought with it, for the scores of women workers, freedom from bondage and penury.

Today, a large number of the women are managing the granite quarries where they had worked earlier for wages as meagre as Rs 7 a day and often as bonded labourers. And if a proposal pending with the state government is cleared, women's cooperatives all over the state will get preference in running the quarries.

In a bid to resolve two major problems in the area -- lack of response to the literacy campaign and illicit quarrying of granite -- former district collector Sheela Rani Chunkath, decided to involve women workers in running the quarries. The present district collector, Anuradha Khatti Rajeevan, says, "The contractors would get together and refuse to make any bids when we auctioned the quarries. Later, they would exploit the same quarries illegally, which led to huge revenue losses."

Under Chunkath's project, called Development of Women and Children in Rural Areas (DWCRA) and formulated as a part of the Integrated Rural Development Programme, 152 quarries were handed over to women's groups in 1991. Chintamani, president of one of the three DWCRA societies at Kuduminamalai, says, "Once we started handling our own accounts, our daily wages went up to Rs 20. Now society members can even take leave once in a while without losing their wages."

Their success enthused the women to attend literacy programmes, which were tailored to impart basic managerial skills. Relatively secure in terms of wages, many families started sending their children to school. The success of the literacy drive is reflected in the fact that today, the women get raw material and permits from the mining department and even maintain inventory and account registers themselves. Says S Perumal, assistant geologist in the department of mines, "Every DWCRA group has to show its accounts register before it is issued a monthly permit to quarry at the site."

However, success did not come easily to either the district administration or the women. The affected contractors allegedly prevailed on political leaders to get Chunkath transferred. But Rajeevan, who replaced her as collector, is undeterred. "The contractors have tried political pressure and, when it failed, the legal option. But so far the courts have supported our action."

The affected contractors organised a boycott of granite mined by the women's cooperatives. For instance, in the earlier stages of the project in Lamblakudi village, where 16 DWCRA quarries operate, the contractors and brokers got together to ensure that there were no takers for the stone quarried by the women. Finally, the district administration intervened and broke the boycott by selling the stone to outside buyers.

The future is uncertain as well. Once their leases on the quarries expire, will the women's cooperatives be allowed an extension, as a policy decision, by the state government, or will the balance tip back in favour of the contractors?