SC allows French giant to mine in forest; asks Centre to set up a green regulator for projects 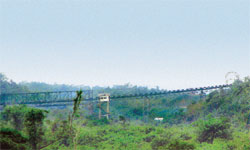 THE Supreme Court has allowed French construction giant Lafarge to resume limestone mining in an eco-sensitive area in Meghalaya. The ruling came on July 6 after a bench said it is “satisfied” with the revised clearance by the Union Ministry of Environment and Forests (MOEF). The court also issued several guidelines for the government, including creation of a national regulator for granting clearances to similar projects.

The US $225 million Lafarge Surma Cement project involves mining and transport of limestone from Shella-Nongtrai villages in East Khasi Hills to its plant in Bangladesh via a 17 km cross-border conveyor belt (see map). Mining has been going on since 2001 even before it received forest clearance.

The court was reacting to a plea by residents of Shella village near the 100 hectare limestone reserve. They had challenged the revised environmental and forest clearance to the project in April 2010. Shella Action Committee, representing the residents, said the site with tropical moist forest is ecologically sensitive and needs protection. The court upheld the decision of MoEF, which gave the clearance on the condition that the company would pay up to Rs 70 crore towards afforestation and Rs 36 crore towards development of the area among other penalties and measures. 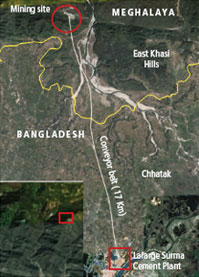 This is not the first time the ministry granted a clearance to the project. Lafarge had got an environmental clearance way back in 2001. Then it did not seek forest clearance claiming that there is no forest within 25 km of the mine and that the area is rocky, unviable for vegetation. In June 2006, Khazan Singh, the then chief conservator of forests of Meghalaya, wrote a letter to MoEF saying there is dense forest in the mining area. MoEF suspended the clearance and halted the project in April 2007 (see ‘Meghalaya limestone quarries closed’, Down to Earth, August 1-15, 2007). Lafarge applied for forest clearance within a month and approached the court for expeditiously processing the application. Then the Central Empowerment Committee (CEC), a Supreme Court-appointed body to look into forest-related matters, said the company should have sought forest clearance before starting work. However, since this is a “fait accompli situation, there was no option but to recommend it for grant of permission for the use of forest land for mining lease”. The court allowed mining in November. But in February last year, it stayed mining work while hearing a petition by Shella residents. It asked MoEF to take a decision and chastised it for giving environmental clearance without inspection.

The court’s latest order directs MoEF to restructure environment governance. The bench said environmental and forest clearances in all the future cases should be granted under the National Forest Policy of 1988 as it provides the roadmap for forest conservation and environmental protection. It asked MoEF to increase the number of its regional offices from six to 10, constitute regional empowered committees on the lines of CEC, and prepare a GIS database of national parks and wildlife corridors. It asked MoEF to appoint a national regulator to appraise projects, monitor their compliance and penalise violators. MoEF has to file a compliance report in six months.

Welcoming the court’s order, MoEF said it has initiated the process of appointing national regulator by issuing a draft note of establishing the National Environment Appraisal and Monitoring Authority (NEAMA) in November last year. Activists oppose the draft. “Instead of strengthening existing institutions and environmental governance, MoEF is trying to create another bureaucratic structure through NEAMA,” says Chandra Bhushan of Centre for Science and Environment, a Delhi non-profit.