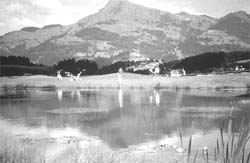 lake Geneva may end up becoming deoxygenated and a weed covered dead zone, thanks to the dams built on the river Rhone in Switzerland, say researchers at the University of Geneva. In the past 40 years, nine large hydroelectric dams have been built on the tributaries of the Upper Rhone -- the lake's main source of water.

Earlier, flooding of river Rhone during summer generated 'density currents' that brought the badly needed supplies of dissolved oxygen into the otherwise stagnant depths of the lake Geneva. But the dams have disrupted the seasonal cycle of the river and eliminated the summer floods, which has led to a decrease in the generation of 'density currents'. The biologists, while studying the impact of the dams on the lake, found that the average number of days when water flows are high enough to generate these 'density currents', has fallen from 55 per year to just 15. This has resulted in very less amount of oxygen in the lake bottom.

"A minimum of 4-5 milligrammes of oxygen per litre should be present in the lake's bottom layers, otherwise they will be a release of phosphorus from its sediments," says Loizeau. He added that the possibility of this happening right now cannot be ruled out. Increased amount of phosphorus will over-fertilise the lake water and spark a process called eutrophication, where algae form smelly toxic tides which suffocate the lake. It will encourage the growth of plankton, which consume more oxygen and allow even more phosphorus to escape. The net result could be a breakdown of the lake's chemical health.