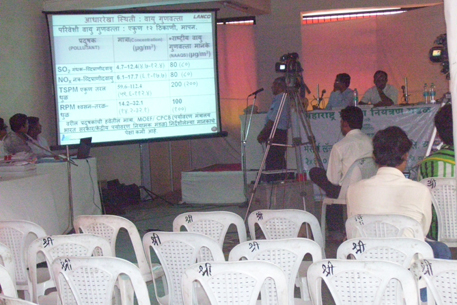 The hearing, held under heavy police bandobast, started with drama. The first 50 speakers–residents of affected villages, Mandwa, Belgaon and Pullali—praised Lanco for its corporate social responsibility. They also expressed their support for the upcoming plant. This was opposed by Poornima Upadhyaya of the Melghat-based non-profit Khoj who said, environmental impact, the subject of public hearing, was being sidelined. Affected farmers also alleged that the hearing had been rigged by Lanco by registering 250 bogus speakers.

Media representatives present also objected to not being allowed to enter the hearing site. Following this, Maharashtra pollution control board regional officer A T Fulmali, who was conducting the hearing, allowed media to enter.

Earlier, a previous public hearing for the same project, held at the project site in February 2011, was declared invalid by the Nagpur bench of Bombay High Court in October 2011, following a PIL by farmers alleging the use of violence and pressure tactics by Lanco and the local administration to silence dissenting farmers. The court, in a rare judgement of its kind, had ordered a fresh public hearing and instructed the Union Ministry of Environment and Forests (MoEF) to review its clearance before February 2014. The company, meanwhile, had been given permission to go ahead with construction at its own risk.

The affected farmers lashed out at Lanco at the hearing for failure to address environmental problems and irregularities in land acquisition. 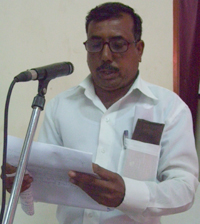 Vitthal Lokhande from Belgaon said that the village was already facing the impact of pollution from dust raised by the ongoing construction work. Moreover, heavy lighting at night was drawing pollinating insects from farms, and as a consequence orange orchards located adjacent to the plant had not borne fruits this year. He opposed the project, saying surrounding villages will have to face water, soil and air pollution once the project is operational.

Ramchandra Urade of village Mandwa rued that his 1.6 hectare farm, located 15 metres from the boiler of the power plant, had been damaged by a two metre deep trench that was draining moisture from the soil. His well had also been filled and access road to his house dug up without permission by the company.

Suresh Gayiki of village Pullali pointed out that no gram panchayat had been taken into confidence while acquiring land. He alleged that the process was carried out through commission agents at rates as low as Rs 1.8 lakh per acre. The company had felled thousands of fully grown trees, and very few trees had been planted as green belt, he added.

Farmers also questioned the manner in which the public hearing was being held in Wardha city, 25 km from the project site. They added the time coincided with the sowing season which is the busiest time of the year for farmers. They also complained that the notice to this effect was published in just three newspapers barely a week in advance of the hearing. “The pollution board has tried hard to keep farmers away from the meeting by asking them to register for speaking in Nagpur,” said Bhaskar Ithape of village Rotha. “Lanco has taken vehicle-loads of its own daily wage labourers to register, while farmers were left behind,” he added. Amidst heavy applause, he called the hearing a hogwash and threatened farmers’ agitation unless the project was withdrawn.

The farmers also rejected the claims of company about its corporate social responsibility activities. They pointed out that solar lamps provided by it were already out of order and 80 per cent of the saplings planted in the name of green belt had withered. Paramjeet Ahuja, activist with Vidarbha Environment Action Group (VEAG), pointed out that there was no justification for the power plant’s location because it was neither close to a coal mine nor consumers. “Vidarbha does not need this power. The region already has 4,000 MW surplus. So why should it pay for it with its environment?” he asked. Sudhir Paliwal, from VEAG, who has analysed the environmental impact assessment (EIA) report filed by Lanco, indicated glaring omissions. “The EIA mentions nothing about effluent treatment plant, fails to mention the capacity of ash pond, and says nothing about how it would carry out 100 per cent ash disposal after four years of operation, as mentioned in its terms of reference,” he pointed out. The company says it will sell its ash, but the fact is with the number of power plants proposed in Vidarbha, the ash generation could go up to 100,000 tonne per day. There are no takers for such huge quantities of ash, he added. He also pointed out that the water harvesting measures suggested in the EIA will actually pollute ground water. 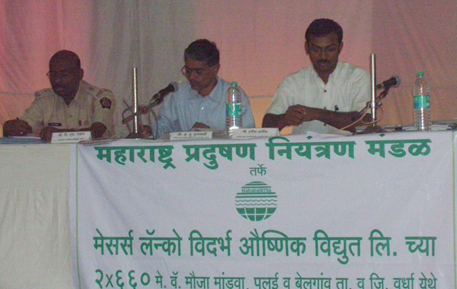 The hearing also came in for severe criticism for irregularities and violation of regulations. Like the previous hearing, it was conducted by the sub divisional officer, whereas an official of additional collector level should be present. What is more, a senior police official was included in the panel, another glaring violation meant clearly to intimidate. The hearing was on till late night with the result that many speakers, especially women, could not speak. Paliwal said that these irregularities will be brought to the notice of the high court in its next hearing on the issue.