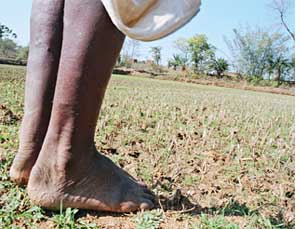 Two pieces of legislation, which will impact millions of people displaced or threatened with displacement in the name of development, will soon come up for discussion in the monsoon session of Parliament. ngos and activists, however, warn that rather than addressing the issue of forcible displacement, the twin bills--Land Acquisition (Amendment) Bill, 2007, and Rehabilitation and Resettlement Bill, 2007--will set the ground for aiding corporate interests in land.

For three decades, people's movements and social action groups have been demanding a repeal of or amendment in the Land Acquisition Act, 1894. The key points of contention are the misuse of the term "public purpose" and the power of "eminent domain" that enables government to acquire land by force. But the amendment bill proposes little to deter such misuse.

Under "public purpose", the bill allows providing land for government infrastructure projects where the benefits accrue to the public, and "infrastructure project" shall include anything from building hospitals and roads to mining. "Since when has mining become public purpose?" asks Manshi Asher, an activist and independent researcher on special economic zones. Such a "loosely defined" public purpose invites land to be treated as real estate, with the private sector's engagement in health and education, says Gautam Bandyopadhyay, member of Ekta Parishad, a network of social organizations campaigning for the rights of the landless.

Though the phrase "for the companies" has been omitted from the preamble and all references to acquisition for companies have been removed, a provision has been made under "public purpose" for the government to acquire land for private players. Section 3(f)(iii) of the bill allows "the provision of land for any other purpose useful to the general public for which land has been purchased by a person ... to the extent of 70 per cent but the remaining 30 per cent ... is yet to be required". The word "person" shall include any company or association or body of individuals. By allowing acquisition on behalf of companies, the bill brings private purpose into the definition of public purpose, says Walter Fernandes, director, North Eastern Social Research Centre, Guwahati.

If the definition of public purpose is read together with the definition of infrastructure projects, it becomes clear that the focus is on infrastructure development that will benefit private individuals or companies, not the displaced, points out Arundhati Dhuru, a people's movement activist. The bill also allows government to acquire land in case of urgency within 15 days of publication of a notice. "Urgency has, however, not been defined," says N C Saxena, former secretary, planning commission.


The rehabilitation and resettlement (r&r) bill is not ground-breaking either. Weak provisions and vague language of the r&r policy announced in October last year find their way into the bill. The bill, like the policy, states that wherever possible, projects should be non-displacing, while the 2003 r&r policy laid emphasis on least displacing projects.

While recognizing the injustice of forced displacement, the bill asserts that it is an inherent part of development, thereby trivializing its social, environmental and economic costs, says the Delhi Solidarity Group, an ngo working with people's movements. Though minimizing large-scale displacement is an objective of the bill, it proposes no mechanism to ensure this.

The r&r bill calls for social impact assessment (sia) of projects causing involuntary displacement of at least 400 families in plains and 200 families in hills. The Delhi Solidarity Group points out that most ongoing projects in the country have affected less than 400/200 people, therefore, these projects will be outside the purview of the act if the bill is passed in its present form. This is especially true of the Northeast where population density is low. Also, only those displaced by government acquisition will be eligible for r&r benefits.


The bill does not guarantee land for land and rehabilitation-based on alternative livelihood. The bill states affected families owning agricultural land shall be allotted land "if government land is available in the resettlement area." Phrases like "if available" and "as far as possible" in provisions related to land allotment and employment in projects leave ambiguities for project authorities to evade the responsibility of proper rehabilitation, says the Delhi Solidarity Group. Also, many state governments and public-sector undertakings have their own rehabilitation and resettlement policies, which may bypass the bill's prescriptions, says Dhuru.


The r&r bill bars civil courts from entertaining suits on matters that are the responsibility of the r&r administration. Grievances may be taken to a government-appointed ombudsman. This means beneficiaries and benefits of rehabilitation will be determined solely by the government, says Bandyopadhyay. As he says, "with no scope for legal recourse, the fundamental right to equality is being challenged".