Lead to a falla

A Peruvian town poinsoned by a metallurgical plan 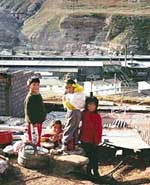 the Doe Run Company (drc) in Peru has been held responsible for lead, antimony and cadmium poisoning of the residents of La Oroya town in Peru. It is owned by the drc, a company in St Loius, usa, operator of the world's only multi-metal facility, and the Americas' largest integrated lead producer.

A group of researchers led by Fernando Serrano of St Louis University collected blood and urine samples from 360 men, women and children of La Oroya and a neighbouring town. The samples were analysed by the us Centers for Disease Control at Atlanta, Georgia. More samples of children were taken, being a vulnerable group.

Together with lead, levels of cadmium and antimony (that causes genetic defects, heart and lung problems) were found to be 30 times the average us levels. High levels of arsenic, cesium and other toxics were also detected.

The analysis found current studies were inadequate to link the elevated toxic metal concentration to the smelter. A study by the company and the Peruvian health authorities had shown that more than 99 per cent of the nearly 800 children under the age of six had blood lead levels that exceeded international standards.

DRC said the smelter had been polluting the area for decades even before they bought it eight years ago. They also claimed they had worked to decrease emissions and spent US $78 million to modernise the smelter built in 1922. DRC said by 2006, it would invest US $94 million to meet government environmental regulations and reduce lead levels in workers' blood by one third.