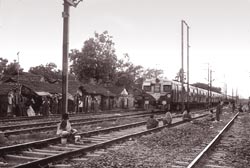 in compliance with a Supreme Court (sc) directive, thousands of 'illegal squatters' along railway tracks around Rabindra Sarobar (lake) in south Kolkata will be evicted soon. The clearing up campaign will be similar to the West Bengal government's 'Operation Sunshine' -- the much-publicised drive to remove hawkers from Kolkata's pavements.

The apex court order brings the curtain down on a prolonged legal drama, which began in June 1997. A writ petition was filed in the green bench of the Calcutta High Court by the Howrah Ganatantrik Nagarik Samity, a Kolkata-based forum which deals with environmental and public interest issues. In June 1999, the green bench ordered that a Rs 76-crore project be executed to build sanitation facilities for slum-dwellers. As per the order the cost of installing these facilities was to be shared by the Eastern Railways and the state government.

The railway authorities, reluctant to foot their share of the bill, claimed that the construction of such structures would severely disrupt train movement and filed a special leave petition in the Supreme Court against the green bench's order.

"Building sanitation facilities for unauthorised squatters would only legalise their status and give them reason to stay on railway property," averred A K Das, chief engineer of the Kolkata Improvement Trust (kit), which is in charge of the lake's upkeep. A division bench of the apex court has, however, directed the Calcutta High Court to ensure that the eviction order passed by competent authorities is implemented.

But local authorities are conveniently overlooking the fact that most of these 'illegal' squatters possess valid ration cards and election identity cards. Expectedly, the people residing in the area are agitated: "This is the home we have always known. How can the government throw us out without making any alternative arrangements?" asks an affected person. Trinamool Congress legislator Sougata Roy points out that the issue of the squatters' rehabilitation is nowhere near being resolved.

Rabindra Sarobar, Kolkata's only national lake, is spread over 48 hectares and comprises several smaller waterbodies. The area also doubles up as one of the few green belts of the city. A report prepared by the West Bengal Pollution Control Board has identified bathing and washing by slum-dwellers of the adjoining areas as the primary reason for the environmental degradation of the lake embankment.