NDDB is not indifferent

This is in response to 'Say cheese to Brussels' (June 16-30, 2009). The sentence, "Thanks to disastrous domestic policies of the last 10 years and an indifferent National Dairy Development Board (nddb), a number of co-operative dairies across the country have either closed down or are on the verge of closure," is wrong. The writer should have referred the records or checked with nddb before making such a comment. nddb continues to provide technical and financial support to dairy cooperatives for strengthening business infrastructure, enhancing production, quality assurance, building a national information network and encouraging women's participation. Using nddb technology, many dairy cooperatives have added value to surplus milk and are manufacturing quality milk products.

The board organized a national-level symposium two years ago to help cooperatives deal with the challenges of liberalization and globalization. To meet the demand, it proposed a national dairy plan with an initial project cost of Rs 17,300 crore for 15 years. The project will focus on measures to enhance milk production, while strengthening and expanding infrastructure such as village-level testing, and chilling and processing plants to procure, process and market milk. nddb's contribution has been part of the larger effort that has made India the world's largest milk-producer over the past decade.

There were times when nddb's annual reports threw encouraging statements. The 1996 annual report, for instance, said, "Transnational corporations have set up dairy product plants in some of the nation's best milk-shed areas that had been nurtured by cooperatives under the Operation Flood" (the largest dairy development programme in the world). One drew strength watching nddb doggedly fight against the Central government's move to let Tetrapak acquire Hindustan Packaging.

Things changed after Verghese Kurien's (the architect of Operation Flood) unceremonious ouster in 2006. For example, why was nddb silent when the Central government banned export of skimmed milk powder during February-October 2007? The ban translated into a loss of over Rs 5,000 crore to dairy co-ops. Why does it not protest disparate income tax rates for private companies and co-ops? Why does it not contest a vat of 12.5 per cent for ghee when that for edible oil is 4 per cent? Why does it not demand parity in duty drawbacks for skimmed or full-cream milk powder as enjoyed by casein? These are all indicators of an indifferent body.

nddb's approach to make the system market-driven is a loose-but-well-understood code for privatization and competition wherein village cooperatives are now expected to run on commercial lines as corporate entities. The board certainly will benefit; the unfortunate losers would be the one-cow-two-buffalo-owning dairy farmers. nddb needs to be reminded of Kurien's words: the aim of the Indian dairy movement is to develop the dairy farmer, not the dairy animal. 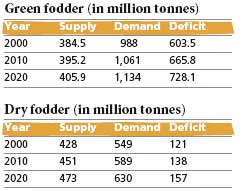 The article on biofuel from India ('Nature cure from India', July 16-31, 2009) is apt. India would use crops such as sugarcane, sweet sorghum, beet sugar and cassava to meet usa's 240 billion litres of biofuel demand by 2030. These crops may not be prevalent in Western countries. But in India, they are in high demand for food as well as for fodder. According to a Planning Commission report, India is deficient in feed and fodder (see table). But the Ministry of New and Renewable Energy does not seem concerned about the needs of humans or animals.

Due to decreasing fodder production, milk production has already gone down and farmers are selling their livestock in distress. This has prompted nddb to submit a proposal to import 10,000 tonnes of milk powder. But milk powder import will depress milk prices and make livestock farming more uneconomical.

The editorial 'Rain or no rain' (August 1-15, 2009) has generated a much-needed discussion on the way we collect, store, retrieve and reuse groundwater-related data. The Central Ground Water Board (cgwb) generates important data, but ultimately throws it all into garbage bins. This attitude needs to be changed. The cgwb, through its surveys, should also generate village-level data and make it available to villagers who need it the most. cgwb officers should also share the data with universities and academic institutes for greater public utility.

Our political leaders do not want to learn their lessons from uncertain and unpredictable monsoons induced by climate change. They like droughts and floods that offer them good opportunity of buying voters.

Most parts of our country receive 1,000 mm rainfall annually. This means a hectare of land receives about 10 million litres of rainwater a year. Even if 50 per cent of this rainwater is stored, it is sufficient to provide drinking water to 1,370 villagers at 10 litres per person per day throughout the year.

Water losses can be minimized by lining the water harvesting tanks with plastic sheets. To minimize evaporation losses, a light mineral oil could be sprayed. The method is not only economical, it does not disturb the groundwater level.

I am convinced we are courting water disaster ('It's raining gdp', July 16-31, 2009). The money allotted to drought-hit areas is of no use unless we have alternative systems like water harvesting, sewage treatment and other effective methods of water conservation in place.

When I see our finance minister sitting with industry bigwigs, I wonder when he will sit with farmer representatives to discuss practical, plausible and rural-friendly schemes for the year before the budget.

Our future depends on proper utilization of rainwater. But are we serious about using this resource efficiently? Regular floods are an indicator of how we allow rainwater to run off damaging soil and land.

Agriculture in India is widely dependent on groundwater for irrigation. Yet this sector does not receive adequate funds. This needs to be changed. A lot of money is allocated for construction of dams and canals but this money gets siphoned out.

The Kosi embankment disaster is just one example. Crores of rupees disappeared in the name of maintenance and strengthening of embankment. In the end no one knows how many people lost their lives.

As a scientist, I would suggest the scientific bodies coordinate and research to find technical solutions to tackle the country's water problem. The following measures need to be pursued:

Of course, these measures are in addition to the ones already being practised like drip irrigation, rainwater harvesting and cloud seeding.

Farmers in Bangladesh thought shrimp farming would contribute to economic development but rather it resulted in soil and groundwater turning saline ('Shrimp lose shine in Bangladesh', May 16-31, 2009). Today, the farmers have money but no water or land for irrigation.

Proper utilization of resources is needed to ensure balanced development. Simple and traditional water harvesting and watershed management techniques could help minimize the water crisis. India should learn from this example.

The residents of Kidwai Nagar in Delhi would like to draw your attention to a problem similar to the household paints ('Home truths', August 16-31, 2009). In our neighbourhood we see people getting their almirahs, cars, water coolers painted on the roadside. These paints too contain toxic chemicals and cause air pollution. They also endanger public health. The harmful chemicals from these paints get accumulated in our bodies and can lead to neurological diseases besides respiratory problems, eye allergies and hair loss. We would request you to help us take up this matter with the government so that such activities are not allowed in residential areas and markets.