Life of a licenced e-waste collector

With no government monitoring, e-waste management is proving difficult 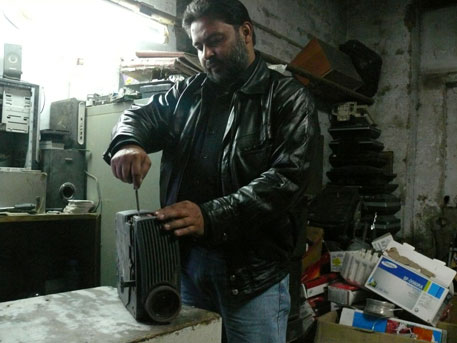 The switch from the informal e-waste recyling sector to the organised sector can be tough. There are no guaranteed returns, as  Mohammad Sabir, owner of a waste recycling enterprise in Delhi realises. “When I was in the informal sector, collecting, dismantling and recycling e-waste was a nightmare,” reminisces Sabir, e-waste recycler operating in Shastri Park area of north-east Delhi, from a very young age. “All the workers worked in a small room without proper safety and health measures. The fumes and pollutants released in the process led to a number of health problems,” he says.

Almost 90 per cent of end-of-life electrical and electronic equipment, or e-waste, finds its way to the informal recycle yards where labourers dismantle it manually exposing themselves to lethal chemicals. Every little component that can be sold is recovered without considering the damage it can cause to the health of workers and environment.

“I decided to join the organised sector so that I could directly approach bulk consumers and producers,” says Sabir. With help from German development agency Gesellschaft für Internationale Zusammenarbeit (GIZ), he founded the Green E-Waste Recyclers Pvt. Ltd and authorised his business as an e-waste collector in 2011. His license as a collection agency allows him to collect and sell e-waste to formal recyclers. Earlier, dismantling was not allowed in Delhi as per the masterplan, but a recent ruling now permits dismantling operations.

Ashish Chaturvedi, senior technical advisor with GIZ, says, “Sabir, like many others who wanted to create a formal business enterprise, was trained by GIZ in Germany to understand the manual dismantling procedures.” 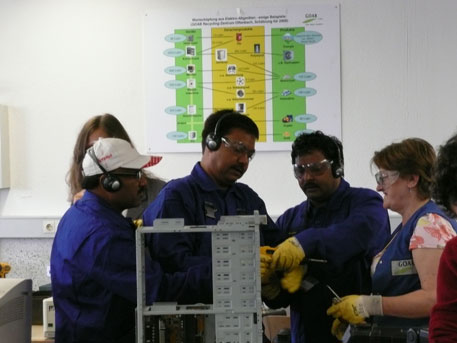 Sabir’s joy of joining the formal sector, however, was short lived. “The first step towards attaining the organised tag, the authorisation letter, was an ordeal in itself. I was issued the letter after months of lengthy paper work,” he recounts. After getting the letter, Sabir circulated the price list of electrical and electronic equipment waste to bulk consumers and producers. To his surprise, few came to him. Most bulk consumers and producers were selling e-waste to the informal sector, which was offering them better prices. “Bulk consumers and producers look for better deals while giving away e-waste. It is very difficult to take them into confidence,” he says.

Despite inadequate e-waste, Sabir had to find appropriate space to store it as per the authorisation. “Finding a place was not the only issue. I also had to pay rent for the big space that I needed. I now pay Rs 50,000 per month as rent where I store e-waste. At times I have to take loan from friends and relatives to pay rent,” he says.

Formalisation comes at a cost. The expenses related to maintaining a compliant recycling unit, paying taxes, filing tax returns are new to Sabir. “Getting business through the formal channel is different. But these are teething troubles,” says Chaturvedi. “Such troubles are not only normal, but the basic norm for any small or medium enterprise trying to find its feet in the industry,” he says.

The situation will improve only when the government intervenes to monitor the formal sector, says Rachna Arora, technical advisor with GIZ. “Formalisation should be a nuanced process. Policy makers must not expect formalisation to happen overnight by passing laws. If the informal process is to be mainstreamed, efforts should be at developing instruments that take the current reality into cognisance. For instance, procedures designed for formalisation can be simplified for collection and dismantling. Also, disposal guidelines for bulk producers should have clauses for the mainstreaming of informal sector,” she explains. “Recognising and acknowledging the services of the informal sector workers would give an incentive to other workers to shift. Regulators must support and encourage models which increase resource efficiency, lead to better compliance and provide green jobs,” she adds.

Despite problems, Sabir is hopeful. “Some day, when the government, producers and bulk consumers decide to tackle the issue, all the vendors will follow my path. I hope it turns into big business one day,” he says. Chaturvedi is also hopeful, “The advantages will eventually outweigh the disadvantages. Formalisation has opened several channels for Sabir. After registration, he was able to collect e-waste from agencies such as schools and residential societies for free. This was not possible earlier given the current e-waste framework in the country.

Now, Sabir has applied for registration as a dismantler. The value added service will give him better price and margin. Till then, Sabir’s struggles will continue.