Lights out in Hong Kong to protest polluted air 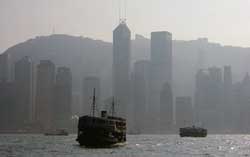 At exactly 8 pm on August 15, 2006, employees of more than 40 branches of Hong Kong's biggest coffee chain, Pacific Coffee, switched off floor lamps and dimmed other lights to join a territory wide campaign against worsening air pollution. People in homes, offices, markets and shops all over the territory joined in.

The "Lights Out" protest was the idea of Alastair Robins, a British expatriate, who says he is fed up with what he calls "the government's failure to clean the air."

Hong Kong's bad air comes mostly from across the border in China proper, where factories and coal-fired electricity plants have created some of the world's worst air pollution. But Hong Kong is to blame for at least 20 per cent of its own problems, experts say.

Hong Kong chief executive Donald Tsang had in the first week of August vowed to get the power companies to meet stricter air-quality standards.But he refused to join the protesters, turning down a request by the campaigners to cancel the daily 8 pm light show staged in the famous harbour for tourists.