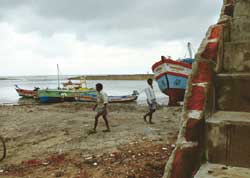 the Union ministry of environment and forests (moef) is set to replace the Coastal Regulation Zone (crz), an enactment for the protection of coastal areas of the country, with the Coastal Zone Management Plan (czmp). The plan will come into force in a few months and will be based on the demarcation of the vulnerability line -- a setback line demarcated all along the coast.

The changes have been made under recommendations from the M S Swaminathan Committee that was set up by moef following the tsunami disaster in 2004. The committee reviewed the previous crz plan and submitted its report in February 2005.

The report finds that setting up regulatory zones on the basis of the high-tide line is inaccurate and unscientific. It thus recommends broadening the definition of coastal zone as "an area from territorial limits (12 nautical miles) including its seabed to the administrative boundaries or the biological boundaries demarcated on the landward side of the seacoast". czmp will also include the inland tidal water bodies influenced by tidal action and the land area along such water bodies.

However, the vulnerability line along the coast, which is yet to be finalised, will be judged on the hazard assessment of individual coastal regions. Space Applications Centre, Ahmedabad, will be the nodal agency for mapping this line. The mapping data will be placed in public domain following the incorporation of required amendments and a clearance from the Ministry of Defence. "This assessment of coastal morphology and seismic activity of the area would help in forewarning natural disasters," says K S R Murthy, scientist at the National Institute of Oceanology.

Meanwhile, moef's attempt to dilute the 'no construction within 500 metre of the shoreline' rule is receiving flak, particularly in the wake of the tsunami experience, when massive damage was seen in the built-up area that was in violation of the 500-metre rule. In January 2005, the ministry already indicated a relaxation in the policy, allowing construction within 500 metres from the shore. The ministry claims that the relaxation on construction was allowed following requests from the state governments to develop some coastal zones into tourism areas. In fact, a significant amendment was moved forward for the development of Special Economic Zones, by permitting resorts and recreational facilities.

The four coastal zones under the crz rule 1991 remain unchanged under the new plan. Though development is completely banned in crz I, crz II includes high population density areas, including towns and cities already within the limit, and allows maximum construction activities. On the other hand, crz III has minimum development and allows development on a case-to-case basis. The islands fall in crz iv.

The vulnerability map, proposed by coastal zone management plan, is for crz II and III. However, the efficacy and enforcement of the new regulations remains to be seen.