Living with smokers is as bad as living in polluted cities 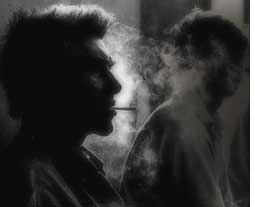 A new study, published online in British Medical Journal’s Tobacco Control peer-review journal, finds that non-smokers who live with smokers are exposed to three times the officially recommended levels of damaging air particles. This is the same as living in smoke-free homes in heavily polluted cities like Beijing or London, reports BBC.

There is enough evidence to suggest that second-hand or passive smoking exposes non-smokers to a wide array of diseases, such as respiratory and heart diseases. The new study, carried out by researchers at the universities of Edinburgh and Aberdeen, strengthens the case.

According to BBC, fine particulate matter (PM2.5), such as fine dust or soot suspended in the air, has been widely used as a marker for exposure to passive smoking. For the purpose of the study, the authors decided to estimate the amount of PM2.5 inhaled by people living in smoking and non-smoking homes.They collected data from four linked studies conducted in Scotland between 2009 and 2013 that had real time measurements of PM2.5 in homes. Air quality from 93 smoking homes and 17 non-smoking households were examined. The results showed that the average PM2.5 concentrations from the smoking households were about 10 times more than those in the non-smoking homes.According to the researchers, non-smokers living in smoking households can reduce their daily inhaled PM2.5 intake by 70 per cent if their home became smoke-free.

“Smokers often express the view that outdoor air pollution is just as much a concern as second-hand smoking in their home.These measurements show that second-hand tobacco smoke can produce very high levels of domestic toxic particles—much higher than anything experienced outside in most towns and cities in the UK. Making your home smoke-free is the most effective way of dramatically reducing the amount of damaging fine particles you inhale,” says Sean Semple of Aberdeen University, lead author of the study, in the BBC report.