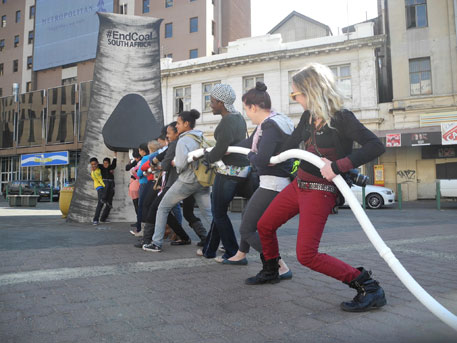 Beginning the morning of Tuesday this week, a 2,000 strong group began marching from the capital city of Dhaka to Rampal in Bagerhat, Bangladesh, which covers a distance of 400 km. The five-day-long march is to protest the setting up of a 1,320 MW coal-fired power plant next to the world heritage site of Sundarbans in Bangladesh. The power plant is a joint collaboration between National Thermal Power Corporation (NTPC) of India and Power Development Board of Bangladesh under the name of Bangladesh-India Friendship Power Company.

Unmindful of the protests, a day after the long march started from Dhaka, the energy advisor to the Bangladesh prime minister declared that the foundation ceremony for the project would be held within a month on October 22. “The project will not harm the Sundarbans as we have taken all measures to mitigate the impact on the environment,” said Tawfiq Elahi, the energy advisor.

Noting that the project site is 14 km away from the Sundarbans, he argued thatr several factors like ease of coal transportation and low population density were behind the choice of the site.
The land acquisition for the project, totalling 1,834 acres (one acre equals 0.4 hectare) was completed earlier this year. While the final agreement between India and Bangladesh was signed in April, the project received environment clearance in August this year. The power department has a target to produce 20,000 MW of electricity from coal by 2030. Setting aside impacts on the environment, power secretary Manowar Islam told the Bangladesh press that the government is planning to set up another 1,320 MW power plant at the same site. The final decision will be taken after feasibility studies and environment impact assessments are done.

Project would cause irreplaceable loss

The march organised by environmental groups and social activists under the banner of National Committee to Protect Oil, Gas, Mineral Resources, Power and Ports is a last ditch attempt to stall the project and save Sundarbans, the largest tidal mangrove delta in the world, spread across India and Bangladesh. The mangrove forests are home to the critically endangered royal Bengal tiger and the Irrawaddy dolphin. The forests also act as a natural barrier to the repeated cyclones in Bangladesh.

“Most countries do not allow coal-based power plants within 20 to 25 km of protected forests because of extremely high levels of pollution. Based on these assessment criteria, three power projects have been cancelled in Karnataka, Madhya Pradesh and Tamil Nadu in India. NTPC would not be able to set up the same power plant in its own country as per Indian laws,” said Sheikh Muhammad Shahidullah, convenor of the national committee.

The coalitions of environment and social activists have highlighted several problem areas. After the plant is in operation, it will release 142 tonnes of sulphur dioxide and 85 tonnes of nitrogen dioxide daily, according to the Environment Impact Assessment (EIA) report. The rise in the pollution levels will be within prescribed standards in residential and village areas, states the EIA report. Environmentalists argue that the standards used should be for an ecologically sensitive area and not residential areas. The project will release 7.9 million tonnes of carbon dioxide every year on which the EIA report is silent, they said.

The thermal power plant will draw water from the Possur river at the rate of 9,150 cubic metre per hour and release the treated water. Not only will this deplete water from a river where the flow reduces during summer months, but discharge of effluent water at high temperature will impact the biodiversity. The other concerns are waste materials: 750,000 tonnes of fly ash and 200,000 tonnes of bottom ash will be generated every year. The dumping of ash has raised concerns of leachate entering groundwater and polluting the delta.

The coal required for the power plant, some 4.7 million tonnes a year, will be imported from India, Australia, and South Africa via the sea route and reach the site through the Sundarbans delta. Large ships will ply inside the delta for 59 days in a year on a 30 km stretch, while smaller barges will carry coal 236 days every year on a 67 km stretch. The busy traffic inside the Sundarbans reserve forest will lead to air and water pollution due to coal dust, the waves generated due to movement of ships will erode mangrove banks and cause noise pollution in the forest area. 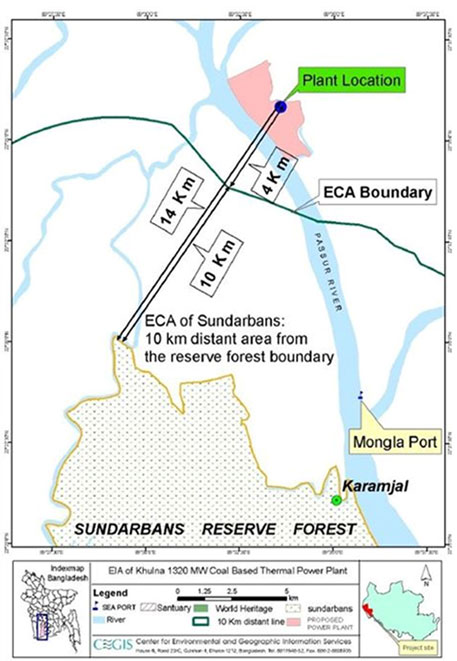