35,000 walruses were seen resting on a sea shore in northwest Alaska 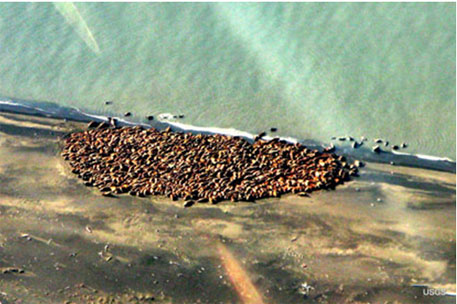 Unable to find ice to rest upon in sea, Pacific walruses have been crowding on a shore in northwest Alaska. Walruses cannot swim continuously and take breaks to rest on ice floating in the sea. But loss of ice due to global warming has forced them to look for land.

“An estimated 35,000 walrus were photographed Saturday about 5 miles north of Point Lay, according to the National Oceanic and Atmospheric Administration (NOAA),” says a news report published by ABC News. NOAA is a US federal agency and the huge gathering was noticed during its annual arctic marine mammal aerial survey, said spokeswoman Julie Speegle, according to the report. The gathering was first spotted on September 13, says a report published by Time.

The loss of ice is a result of global warming which has been destroying walrus habitat. According the World Wildlife Fund (WWF), climate change is causing the sea to absorb more heat, speeding the ice melting process. “Arctic sea ice extent has decreased between 3.5 - 4.1 per cent per decade between 1979 and 2012,” a report by WWF says.

“Summer sea ice extent is now about one-third less than between 1979 and 2000. The record lowest sea ice extent was in 2012 and the second lowest average sea ice extent on record was in 2007. Although the sea ice reduction in September 2013 wasn't as extensive as in 2012, it is still the sixth lowest recorded,” the WWF report adds.