Lost memory could be retrieved 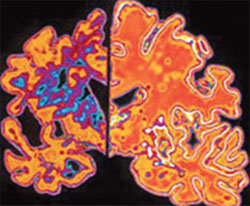 Where do memories get stored in the brain? How does a person suffering from Alzheimer’s lose it? For decades, neuroscientists have believed that long-term memories get stored at synapses—physical contact between the arms of neurons (nerve cells) that help process and transmit information through electrical and chemical signals. Synaptic connections are the first ones that get destroyed with the onset of Alzheimer’s, affecting one’s memory. 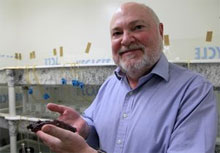 David Glanzman, scientist from University of California, Los Angeles, has contradicted the theory and proposed another that suggests that memories are neither formed nor stored in the synapses. Backed by some concrete evidence, his theory suggests that memory loss could be a temporary problem and could be restored if detected at an early stage of Alzheimer’s.

Glanzman and his team studied neuro activity of Aplysia, a sea snail species with significantly large and easy-to-observe neurons. To understand where it stores memories, the scientists first trained the Aplysis to be scared of mild electric shocks. They enhanced the snail's withdrawal reflex by giving it several mild electrical shocks on its tail. The enhancement lasted for days after a series of electrical shocks, which indicates the snail’s long-term memory.

The scientists then studied its sensory and motor neurons, which control the withdrawal reflexes, in a Petri dish. Glanzman and his team knew that shock causes the central nervour system to release serotonin, a neurotransmitter. When the scientists added serotonin to the Petri dish, they realised that new synaptic connections were formed. But if the addition of serotonin was immediately followed by the addition of a substance that inhibits synthesis of the protein, the new synaptic growth was blocked and long-term memory could not be formed.

Long-term memory is a function of the growth of new synaptic connections caused by serotonin. As long-term memories are formed, the brain creates new proteins that are involved in making new synapses. Any disruption in the process may thwart the process of building long-term memories, they said in the paper published in open access online science journal eLife.  This is primarily the reason people often cannot remember what happened just before a concussion.

The researchers also wanted to understand whether synapses disappeared when memories did. To find out, they counted the number of synapses in the dish and added a protein synthesis inhibitor to it 24 hours later. A day later, they re-counted the synapses and found that new synapses had grown and the synaptic connections had been strengthened; late treatment with the protein synthesis inhibitor did not disrupt the long-term memory. The scientists then added serotonin to the dish, waited for 24 hours, and then added another brief pulse of serotonin—which served to remind the neurons of the original training—and immediately afterward add the protein synthesis inhibitor. When they re-counted the synapses, they found that the number had reset to the number before the training. This suggests that the “reminder” pulse of serotonin triggered a new round of memory consolidation, and that inhibiting protein synthesis during this “reconsolidation” erased the memory. If the prevailing wisdom were true—that memories are stored in the synapses—the researchers should have found that the lost synapses were the same ones that had grown in response to serotonin. But that did not happen.

“Our study suggests that the memory is not in the synapses but somewhere else,” said Glanzman. “We think it’s in the nucleus of the neurons. We haven’t proved that, though.” The research could be a major breakthrough for those suffering from Alzheimer's because even though the disease destroys synapses in the brain, memories might not necessarily get destroyed. “As long as the neurons are still alive, the memory will still be there, which means you may be able to recover some of the lost memories in the early stages of Alzheimer's,” said Glanzman.

“Alzheimer’s is associated with the degeneration of brain and if the brain cells die then the memory is lost permanently,” says Mukul Verma, senior consultant at Neurology Apollo Hospital, New Delhi.

According to a research in 2013, at least one among 10 persons above 80 and one out of four persons above 90 suffer from Alzheimer’s. In India, there are nearly 5 million dementia patients of whom, roughly 70 to 80 per cent have Alzheimer’s. The numbers are expected to double by 2030.