Floods have washed away two villages that cared for the upkeep of the precincts around the World Heritage Site. Will its residents get a chance to rebuild their lives? 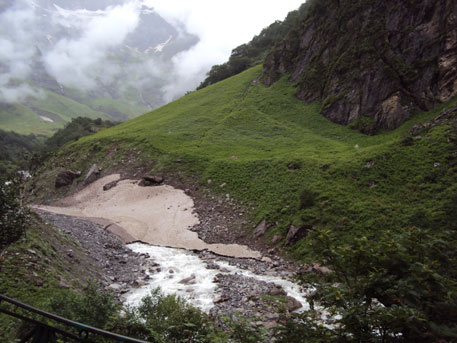 News about the floods in Uttarakhand revive memories of my trip to the Valley of flowers last year. I am glad I could make it then, for this year this picturesque place in Chamoli district of Uttarakhand has been ruined by the extreme rains. Sanjay Rawat, sarpanch of the van panchyat (village forest council) who had guided me around the World Heritage Site last year, called to tell me about the devastation in the area. He said the river that passes through the heritage site had washed away the beautiful meadows. The flowers, too, have been wiped out. His information was hearsay as nobody can go near the area. Rawat and other people stranded in the valley were airlifted to safety recently.

But the Valley of flowers was not the reason Rawat called. The rains had washed away Pulna and Bhyundar—two small village settlements that had been in existence for about a century. Pulna is the winter residence of people of Bhyundar valley panchayat, and during summers, they move higher up to Bhyundar. These settlements had survived for at least a 100 years. The elders in the village say that the last time rains of this magnitude had hit the area sometime in the 1940's, the destruction had been minor. This time round, there is no way that the place can be rebuilt. Rawat said that now the community wants to be relocated to Joshimath. 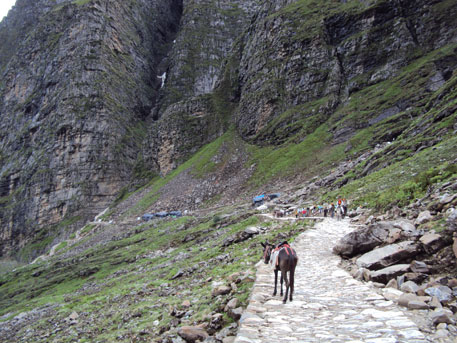 But the authorities have never been sympathatic to the needs of the people. During my visit, I had gone to Pulna to meet the former gram pradhan, Jagdish Chauhan. He had a story to tell – the forest officials in the area had cut down two trees of endangered Taxus wallichiana or Himalayan yew. The trees were just an excuse. The community was waging a war against the forest department to gain rights over the land where their hotels were built in Ghangaria, the transit point where tourists stay overnight before proceeding to Valley of Flowers and Hemkund Sahib. These hotels were the only livelihood option available to them since grazing animals had been stopped in the areas after it was declared a World Heritage Site (see Rift Valley).

Instead of supporting the van panchayat, the forest department seemed more amenable to ousting them and leasing out the land to outsiders. The community had got a taste of such an experiment on an earlier occasion. In 1960, the department had leased out land to the Hemkund Sahib gurudwara for a rest house. After 50 years, though 53 structures existed in the area, only 10 were given on lease by the authority. Last year, there were talks of taking paved roads right up to Ghangaria so that vehicles could ferry the tourists. This meant that more hotels would be needed. The community wanted some assurance that they would have a stake in the profits. They did not get this despite the fact that the van panchayats in the area are supposed to have control over development. People of Ghangaria have been taking good care of the area. Despite the huge number of tourists, a community organisation has managed to keep the plastic menace in control to an extent). 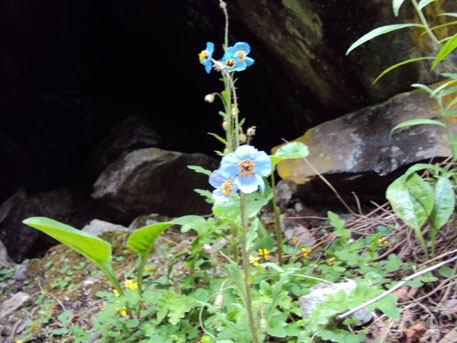 But the bigger question at the moment is whether fragile ecosystems like these should be put through haphazard development. Both the Valley of flowers and Hemkund Sahib are accessible only between June and September, and even during this time, landslides are common. My bus ride from Dehradun to Joshimath took me through areas where huge boulders jutted out of the mountainside and loomed over the road. These were accidents just waiting to happen – a slight tremor, a little rain could easily dislodge these and my co-passengers seemed to hold their breath all though the 10 hour journey. The only conversation that happened was when we crossed a place where a landslide had crushed a car and killed everyone in it a few days back. The driver concentrated on the road while the conductor focused on the mountainside, hoping to catch a signal in case boulders showed the slightest sign of movement. As he stared at the mountainside, the conductor told me the destruction to the landscape was because of the dams being built on the Alaknanda river.

As the area also houses Hemkund sahib gurudwara, religious tourism is likely to restart as soon as the paths are made navigable. This would be the time to set up a better system in place to protect the area. Climate change will bring in more such events. In the absence of a plan, letting people go there is akin to homicide. And for people like me who love plants, losing the valley would mean losing precious biodiversity.