Lower power tariffs can be a reality in Delhi

Electricity bills is one subject that is sure to provoke the anger of any Delhi resident. It is this anger that opposition parties are trying to tap as the state gears for the next Assembly elections this November. Earlier, it was Arvind Kejriwal's Aam Admi Party that went on a spree to restore electric connections of people in low-income colonies whose power connections had been snapped by discoms for non-payment of bills; a more recent protest rally in August saw Delhi state unit BJP leader Vijay Goel promising to lower power tariffs in the state by as much as 30 per cent if voted to power. Power tariffs have increased by 285 per cent after privatisation of power distribution in Delhi, he said. The protest rally was against the latest five per cent hike in power tariffs announced by the Delhi Electricity Regulatory Commission (DERC).

The repeated hikes in power tariffs began after Delhi government-run Delhi Vidyut Board (DVB) was restructured in 2002 and electricity distribution was handed over to Reliance and Tata. At that time it was widely publicised that the move would reduce transmission and distribution (T&D) losses, improve billing and that competition would eventually reduce tariffs. The majority stake in the distribution companies was sold to Reliance's BSES Yamuna Power Ltd (BYPL) and BSES Rajdhani Power Ltd (BRPL) and Tata's Tata Power Delhi Distribution Ltd (TPDDL). The three companies operate in different parts of the city. The job of fixing of tariffs was given to DERC. 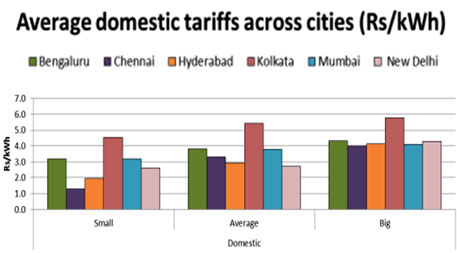 Since 2002, the discoms have been able to reduce T&D losses to 11 per cent in TPDDL areas and 17 per cent in BSES areas, which is more than their set targets. Load shedding was brought down from a high 4.9 per cent 2000-01 to 0.6 per cent in 2007-08. In 1998, billing was done only for 57 per cent of the consumption which improved to almost 100 per cent in 2009. Peak deficit is 1.5 per cent, which is low compared to the national average of 12.3 per cent.  Peak demand was at about 5,014 MW in 2011. Out of this, Delhi’s own generation is around 1,100 MW. This wide deficit is filled in by purchasing power from outside the state. Currently, discoms procure power from generating companies and sell them to consumers at prices set by DERC. Any difference in buying and selling prices is compensated through government subsidies.

Given the increased efficiency and reduction in T&D losses, the questions that often crop up in general conversation among residents are these—why are they still having to pay through their nose for electricity? Shouldn't improved distribution and billing translate into lower tariffs? The average cost of electricity has increased in Delhi from Rs 1.37 per unit in 2002 to Rs 5.87 per unit in 2013, an increase of 328 per cent (for domestic consumers only).

“Tariff hikes have made life difficult for the common man. We expected privatisation to bring down tariffs but this has not happened in Delhi.” says Saroj Verma, resident of C R Park, a south Delhi colony.

One need not look far for a distribution model that has actually benefited consumers. Much like Delhi, most of Mumbai’s distribution, too, is controlled by BSES (RInfra) and Tata Power. RInfra was licensed to operate in the suburbs while Tata operated in the city and suburbs. In 1997, Tata contended that it was eligible to supply power in RInfra-controlled areas without needing a fresh licence. This was challenged in court by RInfra, but in 2008, the Supreme Court gave an order that upheld Tata’s claim. Thus, the system of “open access” was put into action in Mumbai. This meant that Tata and RInfra could offer customers their services in each other’s areas. Since Tata’s tariff was much lower than RInfra’s, more than 160,000 consumers opted to switch over to Tata’s service. Thus, consumers ended up benefiting from the competition between the companies in the form of lower bills (see Tariff differences between Rinfra and Tata Power...). Consumers have a choice of opting for the electricity provider of their choice.

The Maharashtra Electricity Regulatory Commission (MERC) also introduced a cross-subsidy charge in 2011 to allow RInfra to collect past uncollected power purchase costs from users who switch to Tata services.

“In Mumbai, we switched over to Tata Power’s services because their tariff was lower than RInfra’s tariff. Our bills reduced considerably because of this. When we moved to Delhi, we were surprised to see that despite privatisation, tariffs had not reduced accordingly. Since there is no competition between the companies, there is no reduction in tariff,” says Abhishek Banerjee, resident of New Delhi. 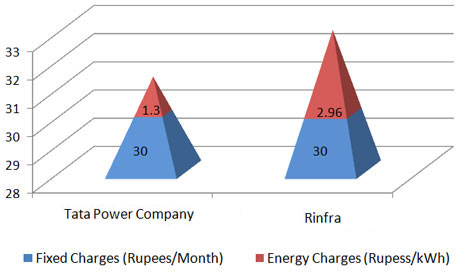 This system of open access is something that citizens of Delhi have been denied. Delhi residents cannot choose their electricity providers. The problem with privatisation in Delhi was that no competition was introduced between the companies. From a government monopoly under DVB, the transmission business changed into a private one. TPDDL controls distribution in north and north-western parts of Delhi while BSES controls the rest of Delhi except New Delhi Municipal Council (NDMC) areas where the VVIPs reside and power supply is still with the government. Since the companies face no competition in their operational areas, there is not much incentive for them to look for cheaper sources of power.

Under the open access system, companies are not given territorial rights over a certain distribution area. Therefore, companies can compete with each other and this gives the consumer the choice of switching their provider in case they are not happy with their present one. Therefore, the company with the most reliable service at the lowest cost ends up winning, thereby benefitting the consumer. 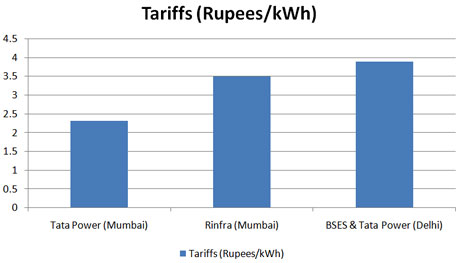 The situation could have been different in Delhi. The Electricity Act of 2003 has a provision for open access in distribution circles. Therefore, DERC can initiate fresh reforms in the power sector by allowing open access in all private circles. Before it is introduced, however, the network modalities like cross subsidy schemes need to be worked out. With proper infrastructure in place, open access will lead to improvement in services and lesser costs for the consumer. Delhi still faces the dilemma of not being able to generate its own power and will be dependent on other states and utilities for its demand. Companies will be forced to negotiate long term power purchase agreements with generation companies to bring down their costs in the face of competition. Performance of the utilities is also bound to improve while the consumer ends up gaining as observed in the telecom sector. Without open access, privatisation will not benefit the consumer as originally intended.

“While non-discriminatory open access in transmission is a reality, open access in distribution, which is critical to ensure competition in the distribution sector and provide choice of supplier to the consumer, has not taken off in the country in a big way,” says Praveer Sinha, chief of TPDDL. He says that the resistance  to change on part of distribution utilities and regulators across the country is understandable because they fear they will end up losing by subsidising (industrial) consumers, which would lead to significant increase in tariffs for subsidised (domestic, agricultural) consumers. “But it is imperative that ways and means be found to encourage retail competition,” he adds.

But experts in the energy sector do not see open access being allowed in Delhi in the near future. “Open access in Delhi has not been allowed so far and will not be allowed in the foreseeable future till there is clarity in the government’s mind that the private sector discoms have to be treated on the same lines as government-owned discoms,” says Harry Dhaul, director general of Independent Power Producers Association of India, an independent association of private power producers, of which Tata Power is a member.

He explains the reasons for tariff increase in Delhi. The city buys most of its power from government-owned entities like National Thermal Power Corporation and Damodar Valley Corporation (DVC), which are partly dependent on imported coal; the rising cost of coal and shipping and deterioration of the Rupee v Dollar exchange rates has resulted in a real increase in tariff. “The fixation of all the stakeholders on looking at tariff alone without taking into account the progress made by the discoms in upgrading, revamping and modernising distribution is indeed sad as nobody is ascribing any credit for improved power supply, reduction in outages and smoother availability of surplus and quality power supply to the Delhi consumer,” says Dhaul.

A BSES official says the company has no objection to open access system. “As a consumer-centric utility, we fully support the implementation of open access in line with the provisions of Electricity Act 2003. But the implementation mechanism should be such that the common domestic consumer is not burdened for the sake of a few bulk consumers,” he says. “We have no objection to the implementation of open access, provided the associated issues are sorted out by the regulator (DERC) in a transparent manner and it does not lead to cherry picking of a few high-end consumers, which would further burden the common domestic low-paying consumer,” he adds.

Though open access regulations were notified by DERC in 2007-08, but a transparent and equitable implementation mechanism, which protects the rights of all the stakeholders even while it provides the consumer a choice of operator is still awaited.

Presently, the open access regulations notified by the DERC provide for open access to bulk consumers (1 MW and above). It is noteworthy that not a single consumer has availed “open access” because a transparent and equitable implementation mechanism and charges have not been notified by DERC.