There is no village, says collector 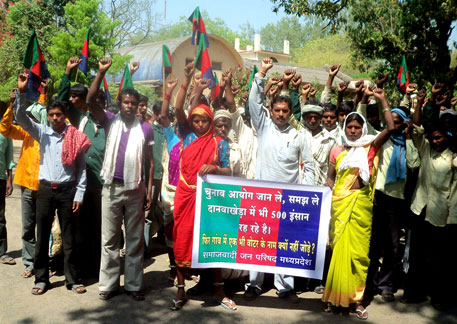 Some 100 tribal residents of village Dhanwakheda in Betul district of Madhya Pradesh, led by Fagram, Samajwadi Jan Parishad (SJP) candidate from Betul Lok Sabha constituency, presented themselves before the district collector and returning officer on April 10, demanding that their names be included in the voters list. Residents said they had been applying repeatedly for voter IDs but that the administration has cut them out, calling them encroachers and claiming that the people do not live in Dhanwakheda village.

The village residents have been demanding voting rights since 2012, said Rajendra Gadwal of SJP, adding thet the administration has turned a deaf ear to them. Recently, 55 people from the village gave an application to the sub divisional magistrate of Shahapur in October 2013 who was district collector Betul in December 2013. When both appeals failed, residents made a complaint to the Chief Election Commission of India (ECI) on March 27, 2014. Following instructions from ECI, the district collector visited the village and filed a report which said the village was abandoned.

Collector R P Mishra told Down To Earth (DTE) that no village by the name of Dhanwakheda exists. “I visited the area some time back, and found just about 10 people in a tiny hamlet inside a forest,” he said. “These people are residents of village Haldumatia in Chhindwada district three kilometre from here,” he added. He also claimed that the people were registered as voters in Haldumatia. “They come to the forest seasonally to collect minor forest produce. The election card move is just a ploy to grab forest land,” he said.

Residents, however, say that they have lived in the village for a decade and a half, and have never voted in their lives.

Gadwal said the collector had not visited the village at all but only one of its hamlets. “Tribal villages are not like regular villages – many villages are a collection of small hamlets. The collector should have made a more detailed investigation,” he said. Gadwal also said that this being the mahua-picking season, most people are out in the forest in the day time. “The collector did not provide prior intimation of the visit, so people were not prepared.”

When DTE asked Mishra for the list of people who were registered as voters, he said he had information on only the 10 people he had found in the village during his visit. He, however, did not provide a list of these people either.

Encroachers too have voting rights

SJP activist Anurag Modi, talking to DTE, said that being encroachers does not discount the voting rights of the people as they are still citizens of India. “Citizens have a right to vote in an area if they stay there consistently for six months. Even if the people are registered voters, to which effect the collector has not provided any evidence, their names can be included at the location they desire and be struck off from the previous location. Why is the administration not taking such a step?”

He said that in the Ghodadongri range where Dhanwakheda village is located, there are some 25 villages which do not have either the status of revenue village or forest village. “These people constantly face aggression from forest officials – burning houses, filing false cases and destroying crops and plantations is all in their day’s work.”

Regarding Dhanwakheda, Modi said that the village had migrated to Chhindwada from its original location decades back because of an epidemic outbreak. “Among tribals it is a done thing to abandon a village for some years in case of a calamity or an epidemic outbreak. The people had migrated back to the village in 2001. Since then, cases of encroachment have been filed against them in the years 2003, 2004 and 2005. This is clinching evidence that the people have been living here since a decade-and-a-half.” He said that applying for rights under Forest Rights Act is also proving difficult because government is refusing to grant forest village status to the villages.
With administration totally hostile, it remains to be seen if the people of Dhanwakheda will get to use their voting rights come voting day on April 24.