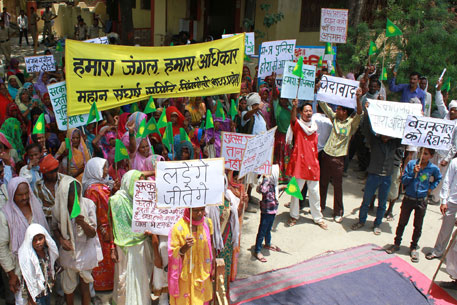 The approval to mine Mahan coal block in Madhya Pradesh's Singrauli district has been challenged  before the National Green Tribunal. The coal block was jointly allocated to power giant Essar and alumunium producer Hindalco to 2006; mining clearance to the project was granted earlier this year. On Tuesday, Mahan Sangharsh Samiti, a grassroots organisation opposing the 11,000 crore coal mine project to be developed in Waidhan taluka of Singrauli district, filed a petition disputing the forest clearance accorded to the mine.

Haridayal Singh Gond, a resident of Amelia village, which would be directly affected by the mines spread over 1,000 ha, says in the petition that the stage 2 forest clearance accorded to the project is based on a forged gram sabha resolution passed without the knowledge of the residents of Amelia and other adjoining villages. According to the terms of reference (TORs) given by the Union Ministry of Environment and Forests (MoEF), mining can commence only after the gram sabhas of affected villages approve mining. Further, the TORs also states that community forest rights (CFRs) of Amelia have to be resolved first before granting any clearance to the mine. Gond has stated in the petition that CFRs are yet to be settled, while gram sabha passed the resolution illegally without the knowledge of the people.

Earlier this month, Singrauli police arrested two members of Greenpeace and two members from Mahan Sangharsh Samiti (MSS) for allegedly trying to stop forest officials from conducting a survey of the trees. On May 8, Singrauli Police barged into the office of MSS in Amelia village and arrested Akshay Gupta and Vinita Gupta of Greenpeace along with Vijay Shankar Singh and Bechanlal Shah of MSS for obstructing government officials from carrying out their duty. While Shah still remains in the police custody at Waidhan town, other activists were released on bail.

Entry for other mines made easy

MSS has stated that there are 54 villages dependent on the Mahan forests of Singrauli; residents of five villages, Amelia, Bandhaura, Budher, Suhira and Barwantola have organised themselves under the banner of MSS to assert their forest rights. MSS has stated coal mining in the area will destroy the livelihoods of over 50,000 people. “Mining in Mahan would mean opening doors for other coal blocks like Chatrasal awaiting approvals in the Mahan forests, which will further fragment the entire forests in the region,” says Gond.

Recent arrests have agitated the residents of the villages even more. Greenpeace issued a statement saying that Akshay and Vinita were filming the government officials counting the trees, while Singh and Shah along with others were peacefully protesting. A Greenpeace activist further added that police officials were forcing a confession out of the arrested members to say that they snatched the equipment belong to the forest department, which were being used to conduct the tree census. According to the collector of Singrauli, M Selvendran, the police officials had to arrest them at night since there was fear of backlash.

“The way in which MSS members were arrested on May 8, clearly shows that the police and the administration are using state power to crush the movement against Mahan coal. We have been trying to file an FIR against the forged gram sabha resolution for the past three months, to which the authorities have turned a deaf ear. But surprisingly, it took them only a day to falsely implicate activists and harass them. This kind of high-handedness by the Madhya Pradesh police is totally unacceptable,” says Priya Pillai, senior campaigner with Greenpeace India.

Amelia and other villages are also facing threat from growing fly ash pond of Mahan Power Limited, a company owned by Essar Power, which now seeks to extract coal from beneath Mahan forests. Last year, the power plant faced closure action from Madhya Pradesh Pollution Control Board for not following the norms related to the disposal of fly ash. Residents of Amelia and others say that fly ash has already contaminated their fields. Amelia residents even say that the company is yet to construct a fly ash pond.

As of now, MSS has only challenged the legality of the forest clearance granted to both Essar and Hindalco through this petition in the National Green Tribunal.  “Even as we speak now, about 500-odd residents of Amelia are on a strike to protect their forests and livelihoods,” said Gond on Tuesday, after NGT admitted the petition for a hearing on May 26.

The allocation of Mahan coal block has been controversial right from the very beginning. The mining plan was initially rejected by former environment minister Jairam Ramesh. However, it was granted in-principle (stage 1) approval by MoEF on October 18, 2012, after substantial pressure from the Group of Ministers (GoM) on coal mining when both the companies, Hindalco and Essar wrote to Prime Minister Manmohan Singh. The MoEF approval came with 36 conditions, which require a range of studies to be completed and the processes under the Forest Rights Act to be complied with.

On March 6, 2013, a special gram sabha on Forest Rights Act was held to give a go-ahead to the mine. According to an RTI filed by Shah, now behind the bars, the gram sabha was attended by 182 people while a copy of the resolution acquired through RTI shows 1,125 signatures. Shah and others have also presented to the local administration evidence that most of the signatures in the resolution have been forged. MSS members say that the document even contains names of people, who have been dead for a long time. When MSS approached the local police, officials did not reguster their complaint. Despite protests, on February 12, then environment minister Veerappa Moily granted the stage II forest clearance on the basis of this resolution.