Vote likely to be split between the Congress, NCP and BJP 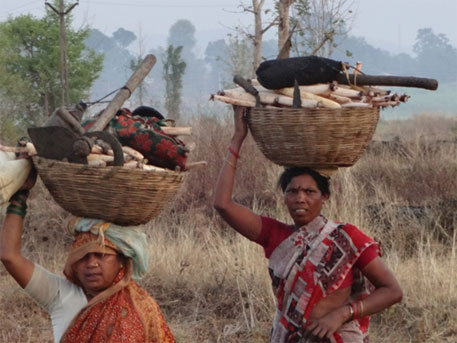 This time, the most important issues in tribal constituencies are education, nutrition, roads, healthcare and government services. Forest rights continue to take a back seat as voters are more concerned about the quality of services and implementation of various government schemes.

It is difficult to predict which way the tribal vote will swing, since voters are disappointed with both the ruling UPA and the BJP-led government at the Centre. A strong anti-incumbency trend against the UPA, say observers, is likely to benefit the BJP. The final outcome, however, remains heavily dependent on local issues.

“Kolam tribals are concerned about the implementation of health and education schemes. Most government welfare schemes are not reaching a large section of the tribal community,” says Ajay Dolke of the non-profit Srujan, which works with Kolam tribals of Yavatmal district. “Services reach the main panchayat villages, but smaller villages and ‘pada’ hamlets, where a sizeable population lives, are left out.”

He says that voters are also discontented with the quality of education at government schools. “While schools have come up in a lot of villages, thanks to the Right to Education (RTE) Act, the shortage of teaching staff impacts quality of education.”

Madhukar Dhas of the non-profit Dilasa, which works on drought-proofing in the same district, says that while the issue of land under the Forest Rights Act is high on the priority list of Dhangar and other tribal groups, issues like irrigation and services tend to take precedence in state elections.

Voters are also not sure whom to vote for. “On the one hand, there is the long-standing disappointment with the UPA, and on the other, there is anger at the Modi government for having slashed Below Poverty Line (BPL) rations from 35 to 30 kg per month. People feel that they have been cheated by both,” Dhas says.

Budhaji Damse, a community leader from village Ambe in Pune district, informs that the Mahadeo Koli tribals are more concerned about medical facilities, roads and irrigation. “The FRA has not been very important in this area because tribals have non-forest lands of their own, and there is not much awareness about community forest rights.”

He says that in some constituencies like Ambegaon, the verdict is almost certain. Voters acknowledge the efforts taken by sitting Nationalist Congress Party (NCP) MLA Dilip Walse Patil on roads and watershed works. In other places, however, there is no clear track record of candidates taking up people’s issues. Hence, the verdict is uncertain. “In a tribal tehsil like Junnar, a tribal independent candidate might draw more votes than a non-tribal candidate from an established party,” Damse estimates.

In Maoist-hit Gadchiroli district, about 85 per cent of the area comes under the Panchayats (Extension to Scheduled Areas) Act, 1996, where several constituencies are reserved for tribals. Community leader Nizamshah Katenge, from village Salhe, says the vote is split because community members are contesting from different parties. “In Korchi, for instance, community leaders have been issued tickets by the NCP, BJP as well as the Congress. People don’t know whom to vote for.”

According to Satish Gogulwar from the non-profit Amhi Amchya Arogya Sathi, the anti-incumbency wave against the UPA, coupled with people’s lack of awareness about implications of the BJP government’s actions, is working in favour of the BJP. “People are drawn to Modi’s speeches about his party’s purported development work in Gujarat and Chhattisgarh. But there is little awareness that this ‘development’ is based on forcible acquisition of tribal lands and that the Modi government at the Centre is working to dilute laws meant to safeguard tribal land rights,” he says.

Gogulwar, who works on health issues in Gadchiroli, criticises Modi’s decision of taking diabetes, blood pressure and AIDS drugs off the essential drugs list. “This will impact tribals as these drugs will become costlier. At present, no one is aware that such a decision has been taken,” he adds.

Dolke thinks BJP is a new entrant in tribal areas. “The Congress has veteran tribal leaders like Dharmarao Baba Atram and Nadeo Usendi. On the other hand, Modi is connecting with the common man through TV, which makes reaching grassroots possible,” he says.

Results of the assembly elections will be announced on October 19.