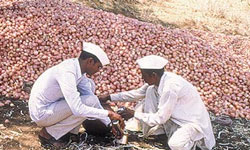 The Central government’s recent decision to add potatoes and onions to the list of essential commodities under the Essential Commodities Act 1955 has drawn ire of onion cultivators in Maharashtra. Various farmer groups, including cultivators and Agricultural Produce Market Committees (APMC), have now threatened to go on agitation if onion is not removed from the list soon.

Interestingly, newly elected member of Parliament from Hatkanangale Lok Sabha constituency in Kolhapur district of Maharashtra, Raju Shetty, whose party Swabhimani Shetkari Sanghatana is an ally with the NDA, has also threatened to protest.

The Essential Commodities Act was enacted to ensure supply of commodities essential for daily life in the market, and to prevent traders from creating artificial shortages by hoarding or black-marketing. The commodities include essential foodstuffs, medicines, fuels and a few other items. Onion is a cash crop and farmers in Maharashtra often store their onion produce for a few months and sell it only when they get a better market price for them. Inclusion of onions in the essential commodities list would mean that this practice by the farmers will be considered hoarding and be made illegal.

Speaking at a press conference in Pune on July 8, Shetty vociferously opposed the move and said that it will take away the little extra income that farmers earn by delaying the sale of their produce. He informed that his party had sent a message to Prime Minister Narendra Modi and agriculture minister Radha Mohan Singh, opposing the move. The politician added that if the government insists on going forward with this move despite opposition, his party will have no choice but to take to the streets.

In Nashik, the hub of onion cultivation in Maharashtra, the representatives of various APMCs have threatened to go on strike unless the decision is taken back. At a meeting of presidents and secretaries of the organisation from the district, held on July 8, Dilip Bankar, president of Pimpalgaon Banswant APMC, said the move is a ruse of the Centre to destroy APMCs and push onion cultivators into deeper debt. “The market committees are there to protect farmers from fleecing by private traders,” said Bankar while talking to Down To Earth. He added, “The Essential Commodities Act will remove onion from the ambit of the AMPC’s jurisdiction and also hit APMCs in Nashik hard as onions are the main crop here.”

The farmer leader added that the prices of nutritious foods like meat, fish and fruits had already skyrocketed. But onion, which still costs just around Rs 20-25 a kg had been included in the list.

No change for the present: government

Meanwhile, Maharashtra minister for agriculture Radhakrishna Vikhe Patil informed at a meeting of APMC presidents from the state that Maharashtra does not have any alternative system for procuring the said commodities. Hence, potatoes and onions will remain in the jurisdiction of APMCs till a new system is developed. He said that Central Government has instructed states to remove the two crops from the APMC provisions, and prevent their hoarding.

He, however, said that the state government will oppose the move, as the APMC Act provides for protection for farmers and crops and removal of these from the regulation would mean that no one will be responsible for protecting the interests of farmers cultivating the crops. He also said that Central Government’s move to fix a Maximum Export Price (MEP) for onion will discourage exports.