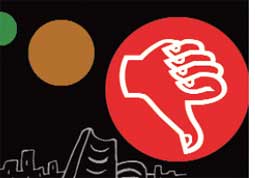 traffic curbs suggested by the Bombay High Court to reduce congestion in Mumbai has been termed impractical by Maharashtra. On June 10, the court had asked the state to try out a traffic restraint scheme. It entailed private vehicles bearing registration numbers ending in particular digits are kept off the road on certain days of the week.

A similar scheme was successfully implemented in Beijing during the run up to the 2008 Olympics--about 800,000 cars were kept off the road each day of the week. This improved traffic flow and reduced air pollution.

On June 24, state government counsel S K Nair presented to the court an alternative proposal that sought to put curbs on registration of new vehicles (see box). The judges asked the counsel for a commitment on the proposals and the timeframe.Justice Bilal Nazki told the state counsel to submit an affidavit in two weeks. The judges warned the state they would order implementation of the scheme even if the state failed to submit its proposal.

The traffic curbs order was a result of a petition the Bombay Environmental Action Group, a non-profit, filed in 1999. The petition sought traffic curbs to decrease vehicular pollution. "This is for the first time the government has shown some initiative though more clarity is needed on how the proposals will be implemented," said Shiraz Rustomjee, the non-profit's counsel.

Sudhir Badami, a transport expert, said the traffic restraint scheme of the high court committee could reduce road congestion by 20 per cent if it is properly enforced. But the government is not serious about implementing any proposal, said Ashok R Datar, chairperson of the non-profit Mumbai Environmental Social network. "The government just wants to build expensive sea links and flyovers, which do not solve the traffic problem. A day after the Bandra-Worli sea link was inaugurated, there was a massive traffic jam," said Datar.

Badami said the proposal of the state transport department to discourage purchase of new cars was a good initiative. The government should also build dedicated bus corridors rather than lanes for fast moving private vehicles. About 4,000 people die every year by falling off overcrowded local trains. This number can be reduced only through a bus rapid transit system, he said.