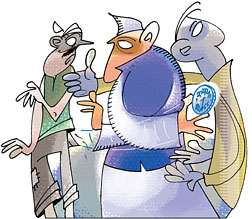 maharashtra is planning to amend the state employment guarantee act to divert the reserve fund to other projects. The move comes when the union government is trying to fortify the National Rural Employment Guarantee Scheme (nregs).

On February 21, the cabinet decided to do away with a mandatory grant to the Employment Guarantee Scheme (egs). Saying a large chunk of the fund is 'unused', the cabinet fixed the annual egs budget to Rs 1,000 crore. Jayant Patil, state finance minister, says the government will allocate a contingency fund for egs, which will be available when a need arises. It plans to amend the Maharashtra Employment Guarantee Act, 1977, through an ordinance, which will enable it divert the egs fund to other projects, primarily irrigation projects in the Krishna basin.

The move has invited sharp criticism. "It should come before the legislature for discussion. Why can the government not wait till March 10 when the state budget session begins? We will ensure that the governor does not sign it," Madhav Bhandari, spokesperson of the opposition bjp told Down To Earth.

The government made a similar move last year too by introducing a bill to amend the 1977 act. After the attempt met with opposition, it referred the matter to a joint select committee of mlas from all parties. The committee's decision is pending. "This new ordinance is the brainchild of the ncp ministers, Patil and Ajit Pawar, minister for water resources. They want to pump money into the irrigation projects in their party stronghold--western Maharashtra. In the past also they had tried to divert funds from social welfare schemes. The contractors for large irrigation dams have also influenced the current move," alleges Bhandari. However, the status of irrigation projects in the state is anything but rosy. Estimates of the 12th Finance Commission shows Maharashtra is in a debt trap and needs over Rs 40,000 crore to complete various irrigation projects.

mlas from the Vidarbha, Marathwada and Konkan regions are not ready to give up their share in the irrigation funds for the benefit of Western Maharashtra. This has also prompted the government to target egs. "Maharashtra is desperate. It tried to divert Rs 529 crore from the social justice department to the water resources department, but Chandrakant Handore, social justice minister, objected to it. Later, it tried diverting funds for the Konkan area but Narayan Rane, the state revenue minister, opposed the move. egs funds are a better bet," says Praful Shinde of Mumbai-based ngo, Sampark, which tracks egs in the state.

On an average, the state collects Rs 1,200 crore per annum as tax. It is expected to contribute a matching amount towards the egs fund. But barely a chunk of this money is used (see 'Impotent plan', Down To Earth, April 20, 2006). For instance, in 2007, only Rs 750 crore was spent. Maharashtra is finding it tough to spend the fund under nregs. "Our district had Rs 60 crore of the nregs fund lying unused. We were barely able to use 10 per cent of the total fund. It is difficult to find labour for egs works and often we had to stop work after two to three days," says Nyandeo Wathare, member of zilla parishad, Parner taluka, Ahmednagar district.


The Union Minister of State for Rural Development, Suryakanta Patil, recently criticized Maharashtra for its "poor performance". Of the 12 districts included in the first phase of nregs, the beneficiaries got only 41 days' work in 2006-07. nregs is expected to provide 100 days of work. The total expenditure in the first phase had been 22 per cent of the total allocated, said Suryakanta Patil in a review meeting on nregs in Mumbai on February 20.

Many blame the government's indolence for the crisis. Shinde asks, "If the government believes that rural people no more need work under egs, why are people still migrating to cities?" For instance, Wathare says, there are close to 10,000 migrant agriculture labourers working in Parner, who come from Nanded, Parbhani and Konkan districts of Maharashtra.

The state government is already in a legal row over egs. In December, H M Desarda, a former planning commission member, moved the Bombay High Court saying the state government had failed to contribute its egs share since 2000 and was instead diverting the fund to other projects.

Many experts say diverting the egs fund to irrigation projects is meaningless, especially because egs itself can make the state drought-proof.

Maharashtra has 60,000 micro watersheds and by creating bunds and undertaking afforestation under egs, results can come in one season. The available fund for the scheme is enough for this.