Stall auction of produce from the forests they protect under joint forest management programme; forest department owes them Rs 85 lakh 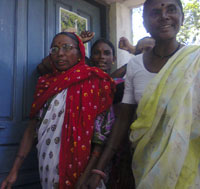 Despite repeated agitations by villages claiming their rightful share in the earnings from forests conserved by them under a participatory programme, the Maharashtra Forest Department has failed to clear a paltry amount of Rs 85 lakh. This amount is to be paid to 530 joint forest management committees (JFMCs) in Chandrapur district in the state.

Recently, hundreds of residents from some 10 villages of four tehsils in the district staged a two-day agitation, demanding that their JFM dues be paid. The villages had agitated earlier in June this year. At that time the chief conservator of forests (CCF), in consultation with forest secretary Pravin Pardeshi, had assured the villagers that the matter would be resolved in a month. However, three months down the line, nothing has moved forward.

On September 26, JFMC members, who were protesting against the delay in official procedures, locked up the Chichpalli range forest office, demanding payment of their dues. On September 27, they stalled timber and fuelwood auction at the forest depot in Sindewahi and demanded that auction proceedings at the Khadangi and Sawargaon depots in the Brahmapuri range also be cancelled till the village shares are paid, informs Paromita Goswami of  Shramik Elgar, a rural labour union, who led the agitation.

Expressing anger at the official apathy towards their rights and contribution, villagers described the great trouble and risks they have taken in protecting their forests. “We go patrolling in the forest even when there is fear of attacks by wild animals. One man nearly died in a bear attack recently in my village. Despite this, forest officials criminalize us for collecting fuel wood and bamboo for our domestic needs. But the department is earning revenue from our forests and not paying our shares. Is this not criminal?” asked Sumanbai Tekam of village Umri Potdar.

The agitation was stopped only after local MLA Sudhir Mungantiwar and state home minister R R Patil assured the JFM committees (over phone) that the issue would be sorted out through a joint meeting between the finance and forest secretaries. “We will wait for some time for an official response,” said Goswami, “But will agitate again if dues are not paid.”

JFM committees at odds with officials

Goswami said the JFM committees in question have worked with the forest department to draw up a detailed village-wise account of timber, fuelwood and bamboo harvested from JFM forests, and worked out the dues of different villages out of the proceeds. 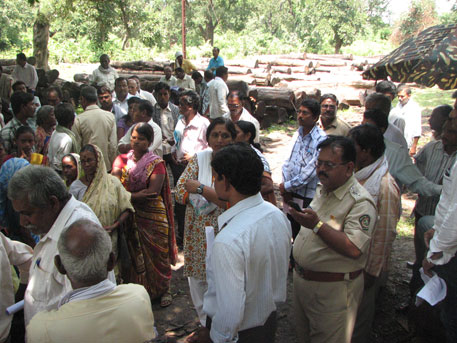 However, there is still confusion regarding whether villages should be given 50 per cent of the proceeds, as provided in the 1992 JFM government resolution (GR) or 20 per cent, as provided in later GRs. In villages like Satara Tukum and Gilbili, where committees were formed before the 2003 GR came into force, initial memoranda of understanding (MOUs) were drawn up according to the 1992 GR, and hence villagers feel that they should be given 50 per cent share. However, says Goswami, “forest department has revised the MOUs post 2003, and is not willing to give 50 per cent share.” Also, the clauses mentioned in the MOUs are not clear as to how exactly the benefits are to be calculated she said. “As of now, since there are just two villages where the 50 per cent share may be applicable, we have decided to settle for 20 per cent to avoid the claims of other villages being delayed,” said Goswami.

A second bone of contention between the committees and department is the manner of spending the village share. While officials are insisting that the village committees have to use the amounts for village development, residents want to use the amount according to their Gram Sabha resolutions and not under forest department's instructions. “This is after all our hard earned money,” says Pravin Chichghare, JFM committee member from Satara Tukum.

The 2003 GR says that 50 per cent of the JFMC’s share is to be disbursed in cash, while the remaining 50 per cent is to be spent by department for development works prescribed in the micro-plan.

Why is the process taking so long?

Rights activists feel that all its promises notwithstanding, the Department is taking suspiciously long time to release the promised funds to JFMCs, casting doubts on its intentions.  In May 2012, the Revenue and Forest Department of the Government of Maharashtra had issued a GR, releasing Rs 74,51,063 to ten JFMCs in Gadchiroli and Gondia districts. At that time, forest secretary Pravin Pardeshi had said this was a beginning which would be followed by release of money to more villages.

This process has not started despite the lapse of 16 months, rues Subodh Kulkarni of the Pune-based non-profit Gyan Prabodhini, who has been working with Mendha Lekha and other villages on forest rights. “Not only this, the JFMCs to which money was released were not given an account of money, as promised by Pardeshi at that time,” says he. “It is doubtful if department intends to pay JFMCs their due share and if it even has a proper mechanism to calculate the shares of villages.”

Forest secretary Pravin Pardeshi could not be reached for comments.