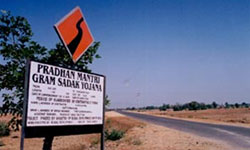 The Union ministry of rural development has decided to introduce some measure of accountability in maintenance of rural roads constructed under a central scheme. It has decided to erect maintenance boards along such roads that will contain details regarding maintenance funds earmarked every year, name of contractors responsible for it and year-wise expenditure details of first five years of maintenance.

The decision on erecting maintenance boards was taken in the backdrop of non-maintenance of rural roads even when funds are earmarked for contractors.

Under PMGSY, there is already a provision of erecting two boards. The first one, known as citizens information board, which has information like cost, length, structure and cross section, contents. The other board is known as logo board, which bears the PMGSY logo (see pic above).

In order to bring transparency in maintenance of roads, the ministry has decided to erect a third board called maintenance board, which would carry details like kind of maintenance, frequency of maintenance in a year and year-wise earmarked maintenance funds and name of contractors engaged for each road.

The provision of  this board is mandatory for those roads which have been completed or were started during the current financial year 2014-15. The cost of board would be included in detailed project report of the road.

The maintenance cost earmarked for rural roads is around 7-9 per cent of total construction cost of the road.  The percentage varies, depending on topography of an area—whether hilly or plain.

“Road tenders include maintenance cost but we had not developed a mechanism to monitor them. It is an initiative to make the community aware, and contractors accountable,” he added.

The order was issued last month to every state.

The PMGSY is fully centrally funded scheme. States only contribute maintenance cost. There is need of different kind of maintenance of roads every year.

In the first year of maintenance after road construction, maintenance cost is low, says  I K Pateria, chief engineer with National Rural Road Development Agency(NRRDA). “In the first year, only flanks of roads are maintained. It can prolong the life of a rural road. In the later period, it needs major maintenance,” he adds.