Major past earthquakes in Nepal

Present earthquake the biggest to hit Nepal in 80 years 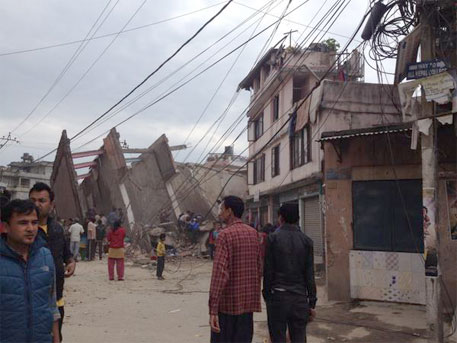 The first recorded earthquake in history of Nepal took place on June 7, 1255 AD. One-third of the total population of Kathmandu were killed including Abahya Malla , the King of Kathmandu valley. Numerous buildings and temples of the valley were entirely destroyed while many of them were severely damaged, the magnitude of the earthquake is said to be around 7.7 in Richter scale

Next recorded big earthquake after 1255 AD was during the reign of King Jayadev Malla. Many buildings and temples collapsed and many more were severely damaged. Although the exact number of fatalities cannot be confirmed, it said there was heavy loss of life because of the earthquake and the subsequent epidemic and famine.

The month August or September of this year saw another major earthquake hit the valley of Kathmandu and the surrounding areas, during the reign of king Shyam Singh. The temple of Rato Matchendranath was completely destroyed while many other temples and buildings collapsed and were damaged. Cracks on land appeared in many places. There was a heavy loss of lives and livestock.

Either on the month of December or January, during the reign King Sri Niwas Malla, another major earthquake hit Nepal and Kathmandu valley. Although very little information is available on this particular earthquake, there was heavy loss lives as well as many buildings, including temples, were either damaged or destroyed.

In months of June and July another significant earthquake hit Nepal. Twenty one shocks and aftershocks of this particular earthquake is said to have occurred in a span of twenty four hours. No written or verbal records survive to indicate any human casualty or the magnitude of sufferings and damages caused.

During the reign of King Girban Yudha Bikram Shah in the months of May or June twenty one shocks of earthquakes in total were felt in Nepal. Although the loss in human lives and cattle were limited, many houses, building and some temples were either destroyed or damaged.

Seventeen earthquake tremors of various magnitudes were felt in the region of Katmandu valley but these shocks probably were smaller relative to the past earthquakes as there was no report of loss of human lives or livestock.

During the reign King Rajendra Bikram Shah on the months of August or September, two major quakes were experienced in the Kathmandu valley. The first one was felt around 6 pm and the second one around 11 pm. Houses, temples, public shelters collapsed. The tower of Dharahara was also severely damaged. The towns of Thimi and Bhaktapur took the brunt of the disaster severely damaging the housing facilities, roads network and various temples. Many building and temples were completely destroyed.

Four major earthquakes were felt in the months of June and July. These earthquakes destroyed or damaged many buildings and temples. However, the extent of damage was much less than the previous ones (i.e., 1833 event). Since there was a lot of rain which commenced and ended with the earthquakes, the search and rescue operations were severely hampered. The Bagmati River was over flooded and a bridge over the river was also swept away. The crops planted near the banks of the rivers were also swept away. There are no records of human or livestock casualties. In total, over 18,000 houses collapsed all over the country.

Magh (January- February) earthquake, Known as Great Nepal-Bihar Earthquake, struck the Kingdom of Nepal and its surrounding areas around 2 pm on the January 16. The magnitude of the earthquake was 8.4 on the Richter scale. Casualty figures were highest for any recorded earthquake in the history of Nepal. In total 8,519 people lost their lives in Nepal, A total of 126,355 houses were severely damaged and around 80,893 buildings were completely destroyed.