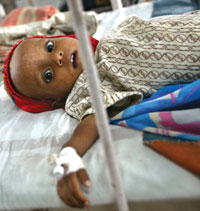 Malaria is the leading cause of death among children in Chhattisgarh, according to the findings of a community-based survey in the state. Even among older people, it is one of the leading causes of death, says the draft report of community-based monitoring for 2012-13. Low birth weight and severe malnutrition along with pneumonia and diarrhoea were the other leading causes of death among children, says the report made available on the state website recently.

The report is the result of community-based monitoring (CBM) and was compiled in May this year. CBM in health services is one of the components of the National Rural Health Mission (NRHM), meant to enhance community participation in health sector. The state has engaged village health sanitation and nutrition committees (VHSNCs) in this exercise.

The CBM report reveals that the mosquito-borne disease is biggest challenge for state; VHSNCs have reported more than 2,400 malaria-related deaths. Since VHSNCs have reported only 25 per cent of total deaths, the actual number of malaria deaths in the state could be even higher (see death reporting percentage). The same holds true for other causes of mortality.

This report analyses nearly 40,000 rural deaths that were recorded by VHSNCs during the year 2012. These deaths constitute 25 per cent of total number of deaths expected according to crude death rate of the state.

Chhattisgarh, a state which has shown great eagerness to outsource diagnostic services along with other health facilities, has clearly failed to monitor its available facilities, if one were to go by the findings of the report (also see Chhatisgarh stalls PPP project to outsource diagnostic facilities). The CBM report says that only 47 per cent of deliveries are conducted by auxiliary nurse and midwives ANMs in sub health centres. These ANMs charge money for providing drugs and conducting deliveries at home, says the report.

The annual health report of the state offers some more insight. It admits that number of referrals related to sick newborns is very low. Implementation of Janani Shishu Suraksha Karyakram (JSSK) is also abysmal. Around 40 per cent delivery patients reaching community health centres (CHCs) and district hospitals did not get free transport and around half of the JSSK patients had to pay user charges. The report admits that benefit under JSSK was not available to majority of the ante-natal cases coming to CHCs and district hospitals. Rashtriya Suraksha Bima Yojana (RSBY) is also poorly implemented in the state.

A major problem in providing healthcare in the state is that the doctors posted in rural areas are not skilled enough. They need training on dealing with emergencies. Timely detection of diseases is also very important to control mortality, the activist said.