Malaria in a ferment

Using yeast to produce a cure 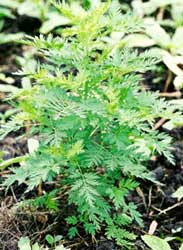 help is at hand to meet the demand for artemisinin, the only medicine for drug-resistant malaria. Researchers at the University of California in Berkeley, usa, have introduced genes from the Chinese herb Artemisia annua (sweet wormwood) into yeast so that it produces high amounts of artemisinic acid -- from which artemisinin can be made.

The yield from the herb is low, making the product expensive for poor, endemic countries. A three-day course of the drug costs us $2.40. But with the new approach the cost can be cut to about 25 cents -- a nearly 90 per cent reduction. Global consumption of artemisinin-based therapy has increased from 220,000 treatment courses in 2001 to around 130 million in 2005. It is expected that the current supply would meet only half the demand.

The us scientists started work on the new method following a grant of us $43 million from the Bill and Melinda Gates Foundation. They first inserted a gene taken from A annua in bacteria. Though they succeeded in producing an artemisinin precursor called amorphadiene, several chemical steps (reactions) were needed to convert it into the drug, increasing the cost of production.

The scientists then inserted this gene and another that converts amorphadiene to artemisinic acid, in yeast -- a common fungus. They found that the genetically altered yeast produced copious amounts of artemisinic acid. Besides, this method is more reliable than plant-based methods because it is not subject to factors such as the weather. Another reason in its favour is the low extraction (or purification) costs. In contrast, the herb extract contains numerous secondary plant products, making separation of artemisinic acid cumbersome and expensive.

The technology has been transferred to a California-based company, Amyris Biotechnologies, for actual production. It may take another five years before the product is thoroughly tested and made available commercially. Reacting to the us study, Bhawna Sharma, a Delhi-based pharmacologist, said the cost effectiveness of the product can be realistically assessed only after the method is adapted for industrial production.

Meanwhile, Ranbaxy is trying to develop synthetic artemisinin in collaboration with Medicines for Malaria Venture, a Geneva-based ngo. "Its simpler structure means it should be much cheaper to produce than the plant version," according to a spokesperson for Ranbaxy. Clinical trials have been initiated and the drug has been shown to be safe and effective in reducing the malaria parasite count. Further trials are planned in India, Thailand and Africa.

Chinese traditional healers were the first to discover the antimalarial properties of A annua (qinghao in Chinese). And Chinese scientists became the first to isolate artemisinin in 1972.