Malarial vector back with a vengeance in Rajasthan 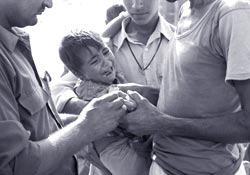 forty-year-old Nizamuddin couldn't have been struck down by malaria at a worse time. He is laid up at the Pokran primary health centre (phc) in Rajasthan's Jaisalmer district instead of tending bajra (millet) and guar (a legume) crops in his fields in Nananiya village. Sadly, a healthy monsoon -- the very source of his hope for a bumper harvest after five consecutive droughts -- has turned out to be the cause of his illness. Incessant rains and the resultant stagnant water in canals and fields have spawned a malaria epidemic in the western part of the state.

For the Rajasthan government, too, the outbreak is extremely inconvenient. Not only could it deter tourists (a major revenue source), it will also give the Opposition another stick to beat the incumbent dispensation with in the build-up to the ensuing assembly elections. "Eucalyptus trees are planted when there is water-logging," he adds. But S M Mohnot of Jodhpur-based voluntary organisation School of Desert Sciences points out that some varieties of plants grown around the canal area "are actually good hiding places for mosquitoes".

M L Gehlot, deputy commissioner, colonisation, Natchana, denies that the lift canal is the epicentre of the problem: "There is no space for water in it because it is full of sand." But a visit to the area shows that this is not the case. Officials in Bikaner challenge the canal-malaria link on the ground that the disease has been reported in the district despite the waterbody being far away from it. But Bikaner does receive a large amount of water from the canal.

There are other human-made structures, too, in which the vector grows. "The drought-relief work done in the area consists of tanks and roads that provide scope for accumulation of water," opines Anwar Ali, coordinator, urmul (Uttar Rajasthan Milk Union Limited) Trust, a Bikaner-based non-governmental organisation (ngo). Further, villagers have personal tanks.

Certain areas are susceptible because of factors that are unique to them. In the Kolayat block of Bikaner, mining pits are a perfect breeding ground. The disease has originated from three ponds, in which many pilgrims take a holy dip, in Ramdevra -- a religious place in Jaisalmer. Trenches dug by the army in the Pokran region provide yet another space for water to collect.


This is the second major epidemic that the region is witnessing since 1994. At that time, an expert committee had made several recommendations. Had all these steps been taken in earnest, the disease might well have been controlled.

In 1997, the Union government also launched the World Bank-funded Enhanced Malaria Control Programme. It was to be implemented in 100 disease-prone districts of the country out of which 10 were in Rajasthan (in its southern part). The selective approach adopted by the World Bank (of including only a few districts) has caused the epidemic, feels Sanjay Sharma, coordinator, Rajasthan Voluntary Health Association (rvha), a Jaipur-based ngo.

The nearly-10-year-long gap between the previous major outbreak and the current one appeared to have lulled the Rajasthan government into complacency. While ddt (dichlorodiphenyltrichloroethane) is recommended for checking the mosquito population, it has not been sprayed in most of the areas. Worse still, the ddt supplied by the authorities is of poor quality. The government was also supposed to introduce larvae-eating fish in waterbodies. This, allege villagers, has also not been done. In Bikaner, the posts of five malaria inspectors are lying vacant. The area does not even have an entomologist to keep tabs on the vector's numbers.


That the state is gripped by an epidemic is evident from the fact that only 56 cases of cerebral malaria were reported in Bikaner last year till September 13. The number is as high as 106 this year in spite of underreporting of cases under political pressure. "I'll land in trouble if I identify Plasmodium falciparum in a blood sample," discloses a technician at the Kolayat phc. "Even patients are not informed about the disease and death certificates do not mention malaria as the cause," alleges Tola Ram Chauhan of urmul Trust's Pokran branch.

In a study carried out by rvha in Pokran this August, 10 patients out of 77 examined were found suffering from cerebral malaria. The figure for the entire area is likely to be much higher, observes Santosh Gandhi, executive director, rvha. Considering the magnitude of the problem, the government machinery is not sufficiently geared up.

Though treatment is being provided in urban localities, the majority of the rural population living in dhanis (small clusters of houses in the fields) is being left unattended. The acute shortage of staff is hampering operations. For instance, at the Natchana phc, where 16 cases of cerebral malaria have been detected, 1800 slides have not been tested. "The epidemic is under control," claims M P Singh, deputy chief medical and health officer, Bikaner. Clearly, he seems to have premised his observations on the doctored medical records.


M K Mohanty, chief medical officer, regional health office, Jaipur, fears that the epidemic is likely to continue till the end of October in view of the pathogen's epidemiology.

Amidst this bleak scenario, community medicine experts like T P Jain opine that the people's involvement is necessary to manage waterbodies efficiently. Jain stresses the need for adopting methods to check the growth of larvae in canals and other structures. He suggests that a bioenvironmental strategy should be employed for the purpose.

Meanwhile, for all the state government's furtiveness, the opposition has got wind of the matter. Malaria will, almost certainly, become a hot issue when campaigning for the polls reaches fever pitch.