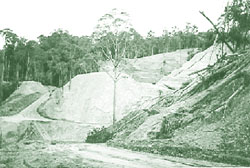 The Malaysian government has decided to revive the construction of the Bakun dam. Environmentalists say that this decision could destroy the world's last great tropical rainforests. The construction of the 2,400-megawatt Bakun hydroelectric dam in the forest area of Sarawak state was abandoned in 1997 as it threatened the habitat of many endangered flora and fauna species. It has already resulted in the relocation of 10,000 indigenous villagers. If completed, it will flood a rainforest area the size of Singapore.

Environmental activists say the completion of Bakun dam will mean environmental disaster for Sarawak, where unrestrained logging is already destroying thousands of square kilometres of rainforests. It will also damage the area's river systems through siltation. "The project is economically unviable and is being revived because of the growing political pressure on the ruling United Malays National Organisation," said Lim Kit Siang, chairperson of the opposition Democratic Action Party.