Mangroves may have saved this village from Phailin 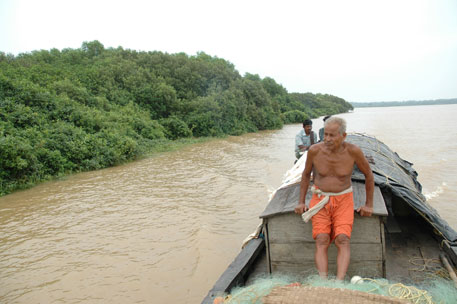 As the Centre and the state governments of Odisha and Andhra Pradesh pat their backs for containing loss of lives during cyclone Phailin, a share of credit should also go to the people who had prepared their own safety nets against such calamities. While early warning and effective evacuation has definitely proved to be a game changer for the governments this time, the efforts of communities to protect mangroves at a few places in the coastal belt might also have played a major role in bringing down the damage.

A 2009 study of the Delhi University’s Institute of Economic Growth has established that the mangrove forests in Kendrapada district had brought down the death toll in the district by 35 per cent during the super cyclone of 1999. The forests shielded the villages by slowing down the wind speed, said the study. Between 1999 and 2011, the mangrove cover in Odisha has increased from 17,900 ha to 22,200 ha. The mangroves might have played an important role in containing the damage this time as well.

Natural shield
Several villages in coastal parts of Odisha have been protecting mangroves knowing they provide a shield against storms. Praharajpur village in Kendrapada district is one such village that has protected a 40 ha mangrove forest for the past 30 years. As Phailin struck the Indian coast, the residents had abandoned the coast and took shelter in the interior towns as a precautionary measure, but they kept hope of returning to their land. Though around 40 out of 200 houses in the village have been damaged, the residents feel had the mangrove not been there, the damage could have been much greater.

“We have heard that the intensity of this cyclone was even more than the 1999 one. In the nearby Sundrikhal and Pentha village, most of the houses have been washed away. We are better off because the forest has taken the initial brunt of the storm,” said Ravindra Behera, a resident of the village. In 1999, hundreds of people had died in the neighbouring villages. Praharajpur lost only two people, that too because a mud wall collapsed during severe rains.

“Our elders had made an embankment along the coast to prevent soil erosion in 1975. They randomly planted mangrove trees on the embankment. Gradually, this plantation converted into a mangrove forest. However, it was during the 1982 cyclone that we realized that mangrove can also prevent the storm from reaching us,” said Balram Biswal, another resident.

Thereafter, the villagers aggressively started planting mangroves on the island and also made provisions in the village to protect the forests. “We constituted a 15-member forest protection committee from among the villagers. The body penalised anyone who damaged the forests in any possible way and a night guard was appointed and paid Rs 100 per night to protect the mangrove,” said Behera.

Model for growth
Today, a dense forest of tall mangrove trees stands between the sea and Praharajpur. Apart from a shield from cyclone, the residents also get wood, honey and fruits from the mangrove. “The story of Praharajpur has also inspired nearby villages to plant and protect mangrove coasts. We hope that the forest comes to their rescue as well,” said Suresh Bisoyi of non-profit Regional Centre for Development Cooperation (RCDC).

Though the mangrove cover has increased to a certain extent in Odisha in the past 10 years, it is not much compared to what it was sixty years ago. Total mangrove area in the state fell from 30,766 hectares (ha) to 17,900 ha between 1944 and 1999. A Delhi University study also showed that the average width of a forest that stood between the sea and a village across 409 coastal villages in Kendrapara was 1.2 km in 1999, down from 5.1 km in 1944.

“The mangrove cover is still very less in the state as compared to what it was 50 years ago. In the past three decades, the frequency and severity of cyclones have increased significantly and the mangrove cover has continuously decreased. The government should have taken the mangrove plantation drive seriously by now,” said Kailash Dash of RCDC.