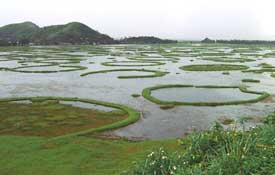 the Manipur government recently tabled the Manipur Loktak Lake (Protection) Bill, 2006, in the state assembly to protect the lake from degradation. The bill is likely be passed in the ongoing budget session.

Together with this, the state government also sent the Planning Commission a Rs 400 crore-proposal for the maintenance and revival of the lake.

To add teeth to the law, the state government has also decided to give the charge of the upkeep of the lake to the Loktak Development Authority (lda), a nodal state government agency, with more power to prevent pollution, encroachment and unauthorised fishing in the lake.

The bill, welcomed by conservationists, is bound to create friction in the communities around the lake as it proposes to prevent alteration, lease, mortgage, transfer or allotment of any part of the lake. If the bill gets passed, nobody will be able to obtain any resources from the lake or knowledge associated to it for research, commercial utilisation or for bio-survey and bio-utilisation, without prior permission.

Experts claim 40 per cent of the waterbody is now covered with phumdi (floating bio-mass) planted by fisherfolk. The proposed project intends to clear the phumdi and rehabilitate the fisherfolk. The North Eastern Council, the nodal body for development projects in northeastern states, has agreed to provide an initial amount of Rs 41 lakh for rehabilitation of the 1,000-member strong fishing community. But the head of the lda Research Laboratory warns that removing all the phumdi could spell an ecological disaster since they absorb nutrients deposited by the numerous rivers which empty into the lake. Even as the lake is cleared and the fisherfolk rehabilitated, the state plans to open the lake to tourism and establishing water sports facilities.