Activists say provisions for rehabilitation in the Bill are vague, and will only work to perpetuate existing problems 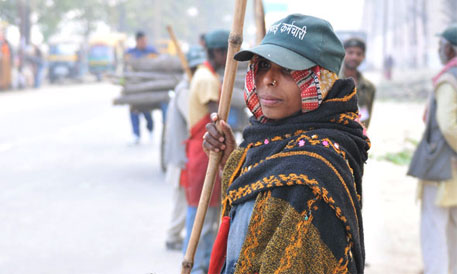 Activists say the new Bill—The Prohibition of Employment as Manual Scavengers and their Rehabilitation Bill, 2012—lacks teeth and clarity, and, therefore, it is unlikely to secure a living for manual scavengers. The existing law, Employment of Manual Scavengers and Construction of Dry Latrines (Prohibition) or EMSCDL Act, which was passed in 1993, also banned manual scavenging, but till date the practice of manual scavenging continues in India. It was hoped that the proposed law would make up for the failings of the existing law.

Both EMSDCL and the new Bill are against manual scavenging, but have different perspectives, says Ashif of Rashtriya Garima Abhiyan, an advocacy group based in Indore which is working for complete eradication of manual scavenging. He explained the difference between the two Acts. “The earlier Act was from the sanitation perspective and the ministry of housing and poverty alleviation was supervising it. The law did not fix the state's liability. So, many states didn't even formulate rules under the Act, claiming their states are free of manual scavenging.” The new Bill looks at manual scavenging from the point of view of restoring human dignity and human rights and talks about rehabilitation and has been drafted by the ministry of social justice and empowerment.

While introducing Bill, Wasnik said the government has worked out a multi-pronged strategy which consists of legislative and programme-based  interventions.

But activists beg to differ. The Bill talks of providing land as rehabilitation package. “But the Bill is silent on the location of land (whether it would be outside or inside a village) and other measures that would ensure dignity of life within a certain time frame. It is still vague,” said Ashif. The Bill is silent on the rehabilitation of even those scavengers who left this profession in the past 20 years. The Bill also does not spell out the  responsibilities and accountability of the local authorities that will supervise rehabilitation.

Wilson Bezwada, convener of Safai Karamchari Andolan, a people's front working for the betterment of manual scavengers and sweepers and cleaners, termed the Bill as another dressing up effort. The Bill does not address the problems that became apparent after the experience with EMSCDL Act; rather the Bill is another exercise to cover up inaction, said Bezwada.

“The Bill does not have concrete measures for rehabilitation. It doesn't talk about mechanism of its implementation. It is still not clear who will formulate the schemes and how they will be implemented,” he added.

In 2003, Bezwada had filed a public interest petition against EMSCDL Act of 1993, arguing that the Act was insufficient to meet its objective. The case is still pending in court. “The earlier Bill also failed to specify the implementation mechanism, which I have challenged through the petition” said Bezwada.

The Bill has broadly defined manual scavengers and does not mention underground drainage cleaners who mostly work without proper safety gear or goggles, he said.

Clause 13 of the financial memorandum in the Bill mentions that Rs 4,825 crore would be needed to eradicate manual scavenging completely in one year. “The survey and identification (of manual scavengers and awareness campaign about their rights and rehabilitation programme would be completed within nine months of the law's notification,” said Ashif. But it is unclear how the government arrived at this amount and what would be the mechanism for spending the money, he said.

The new Bill repeats some of the provisions of EMSCDL. As in the case of the earlier law, the current Bill also provides for vigilance committees under the respective district magistrates, but there is no punishment or penalty if they fail to act, said Bezwada. The Bill talks of imposing penalty on any public authority that employs manual scavengers. “But again it doesn't answer who is the public authority and what is the time frame to collect fine,” said Ashif.

In the meantime when water scarcity in both cities and small towns is increasing, converting all dry toilets into flush toilets (as provided in EMSCDL Act) is another challenge.

“Toilet is never a problem. Problem is of mindset. Replacement of one form of toilet with another is not going to solve problem. Dry toilets were already banned in 1993 but they still exist despite states' claim of having eliminated them,” said Bezwada.

Ashif said the answer to the problem lies in technology. “Western toilets need more water. Many water-scarce countries in West Asia have been using one that use less water. India should learn and adopt,” he said.