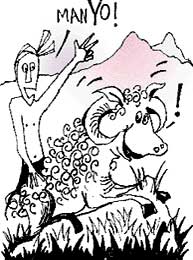 farming in Nepal expectedly is a tough job with hilly terrains all around where irrigation is extremely difficult. The bleak economic scenario, too, adds to the disadvantages and the use of external inputs such as chemical fertilisers is minimal. Cultivation of crops almost entirely depends on locally available nutrients from the recycling of organic residues. The local farmers have devised an innovative process called in-situ manuring to fertilise the lands. It involves the manuring of the fields by tethering animals directly to the fields ( ileia Newsletter , Vol 12, No 1).

One system of in-situ manuring is to keep the cattle in bari lands (unirrigated, unbounded terraces) just after the harvest. This is commonly done in October and November before planting winter crops like wheat and barley, and in March and April before the planting of maize and millet. Animals are fastened to specially selected pegs and left to trot for three days so as to manure the field completely. Certain pieces of land are manured for an extensive period, sometimes for three months at a stretch, by constructing temporary sheds in the fallow lands. These practices help the farmers to feed the animals crop residues on the spot and substantially cut down the cost of transporting manure from permanent sheds to the crop fields.

Another system, also widely practised, uses migratory flocks of sheep and goats. From May to October, these flocks graze on the high alpine pastures above 2,500 m where almost no crop is grown. In winter, the flocks descend to a height of about 1,000 m or so, to feed on crop residues and wild grasses and to manure the field. By May, they leave the cropped areas and enter the higher pastures again. Millet is harvested after Udhouli , the downward movement of the flocks and wheat and barley are harvested after Ubhouli , the upward movement. As the flocks are a cheap and ready source of highly useful manure, they are in high demand. In the high altitude district of Lamjung alone, there are about 80 such flocks with 300 to 500 goats and sheep in each.

The farmers prefer the second method as they feel that sheep and goat manure has a lesser residual and quic-ker effect on crops than that of cattle. According to an extensive survey carried out by the Lumle Agricultural Research Centre ( larc ) in Pokhara during 1989-93, it was found that a field treated by sheep manure yielded almost 30 per cent higher maize than the one treated by cattle manure.

The in-situ method is an effective way of recycling organic residues, since crop residues and animal wastes are absorbed directly into the soil with almost no loss in nutrient contents. Most importantly, it is one of the very successful grassroots practices which is almost fully indigenous.