They don't have family attendants to care for them after surgery 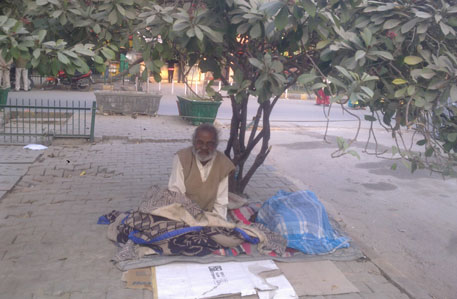 Ravi Ranjan, a tea stall owner in the precincts of Guru Teg Bahadur Hospital, pointed out to a tree where Rajesh, a 53 year old cancer patient died some time back. Rajesh was from Bareilly in Uttar Pradesh and his family could not come for his surgery. He could not get operated because there was no one to attend to him after surgery. "Old people are ignored even in such critical times. As they get ignored at home, they come here. They keep meeting the doctor and getting medicines. People around them attend to them and spend time talking, too,” says Ranjan. But they never get cured.

Rajesh's place is now taken up by Swaran Kumar, 61, from Etawah in Uttar Pradesh. He has been staying under the tree for one-and -a-half years now. He is suffering from throat cancer and is dependent on medicines. It has been four years since he started feeling a lump in his throat, making it tough to eat, even gulp sometimes. After taking medicine for cold and cough for almost two years on the advice of a local doctor, Kumar realised it was not helping him one bit. He arrived in Delhi.

Like most patients from Uttar Pradesh, Kumar went to Guru Teg Bahadur hospital. GTB is the biggest government hospital in East Delhi. Investigations, which took little over a month, showed he was suffering from cancer. “Doctors told me I have cancer in May, 2011 and that it had to be surgically removed. I went back home to figure out next course of action as the treatment needed a lot of resources,” Kumar said.

He did not complain of lack of medicines. “I get medicines from the hospital shop which the doctors prescribe,” he said. However there is no one to care for him during and after the operation. Kumar worked as a construction labourer till he was 55. His three sons and two daughters-in-law are also labourers. He lost his wife 10 years ago. “Everyone in my family is a daily wage earner. They cannot leave their jobs and come to spend a month or so to help me,” he said.

Patients missing out on operations is not a new phenomenon in government hospitals. Among many problems they face is absence of people who can take care of them post-surgery. Despite going to the right doctor and getting free medicines, Kumar's condition did not improve. In absence of an attendant, his operation could never be performed. The government is yet to address this issue by providing attendants for them. Otherwise there will be more people like Rajesh and Kumar who pass their days waiting, in agony.