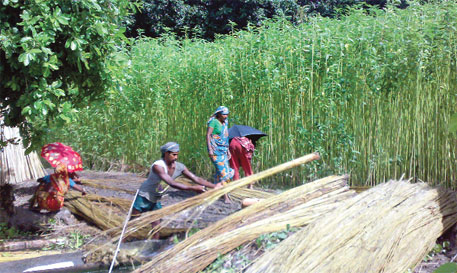 JUTE is the latest fad. It is used in everything from delicate jewellery to hardy bags. Researchers have now found one more use of the omnipresent golden fiber: as an additive in cement to strengthen it by delaying its setting. “During construction, roofs are flooded with water for as long as 28 days to strengthen the structure. Water is also sprinkled on walls for the same purpose. Addition of jute strengthens the structure further,” says Subhasish B Majumder of IIT, Kharagpur.

Majumder and his team investigated the impact of adding jute to cement and found it significantly delays hardening. According to their study, published in Industrial and Engineering Chemistry Research on January 23, this delay in hardening can allow for transport of the mixed mortar and concrete over long distances. The study shows that depending on the amount of jute in the mix, delay in setting could be as long as eight hours. This would allow for a transport of around 200 km, says Majumder.

The group had earlier shown that jute is a sustainable reinforcement material and has the potential to replace steel or synthetic fibers in cement, the most widely used building material. The fiber makes cement compositions resistant to cracks. By reinforcing cement matrix with jute fiber, the compressive and flexural strengths of the resultant mortar was increased to 9 per cent and 16 per cent respectively, as compared to the mortar specimen without jute reinforcement. This comes as an advantage in quake-prone areas, says Majumder.

The study was done to investigate how adding jute to cement mix could change its properties. This is imperative before the material can be used widely in construction. While the researchers are yet to figure out the increase in cost due to this addition of jute, their preliminary studies have shown the addition would cost Rs 40 per cubic metre of concrete.

“This natural fiber is a fantastic reinforcement material for concrete,” says one of the researchers, Basudam Adhikari. “We used the material in sewer pipes, lamp posts and railway sleepers and found that the addition of jute leads to substantial improvement in properties.”