Report hints at global warming as the cause

The month of May this year was 0.66°C (1.19°F) warmer than the 20th century average of 14.8°C (58.6°F). That makes it the second warmest May since 1880, says the National Climatic Data Center (NCDC). The agency, which is a part of the US’ National Oceanic and Atmospheric Administration (NOAA), published its findings in a report, titled State of the Climate: Global Analysis for May 2012.

The report also indicates that this was the warmest May in the history of the Northern Hemisphere since 1880 at 0.85°C (1.53°F) above the 20th Century average. Global land surface temperatures for this month were also the highest ever at 1.21°C (2.18°F) above average. 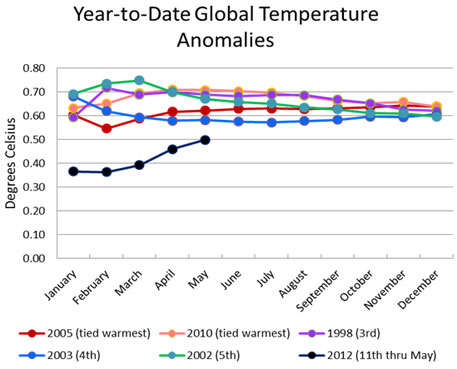 It is tempting to state from the data that the increase in global temperatures even in the absence of any influence from La Niña or El Niño points to the effect of climate change. Nevertheless, scientists are still sceptical of drawing any conclusion based on such short-term fluctuations. According to Krishna Achutarao of the Centre for Atmospheric Sciences at IIT-Delhi, “the attribution of any one month’s high temperatures to any one cause is not possible scientifically”. He did state, however, that temperatures in the last two decades have tended to increase. Land, ocean and combined average of land and ocean temperatures for the January-May period from 1880 seem to bear this out as well (see 'January-May surface mean temperature anomalies'). 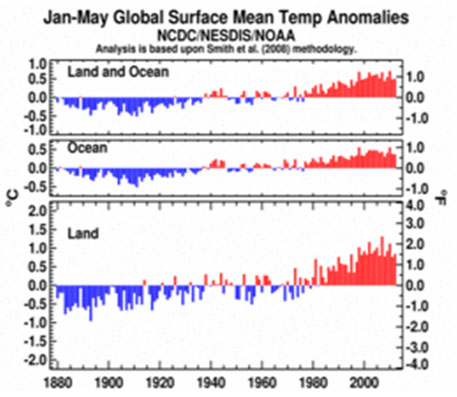 It is also worth noting that according to the report the highest rise in temperatures in the January-May period for 2012 was over especially vulnerable regions such as southern Greenland and northern Russia.

In the Indian context, the report is especially troubling considering the unpredictability of this year’s monsoons, a fact noted by the report, which indicated that the month was much drier than average for India. Recent reports indicate that the monsoons for the month of June were 30 per cent deficient. While a recent press release  of the India Meteorological Department indicated more rainfall in the coming weeks for large parts of the country, there is still cause for concern. The NCDC report has predicted that there is a 50 per cent chance that El Niño conditions will emerge during the second half of 2012, possibly leading to a rise in temperatures that could negatively affect the second half of India’s monsoons. This indicates that the government’s repeated assurances to the media of its preparedness to meet any food shortfalls from a deficient monsoon are likely to be sorely tested in the latter half of 2012.